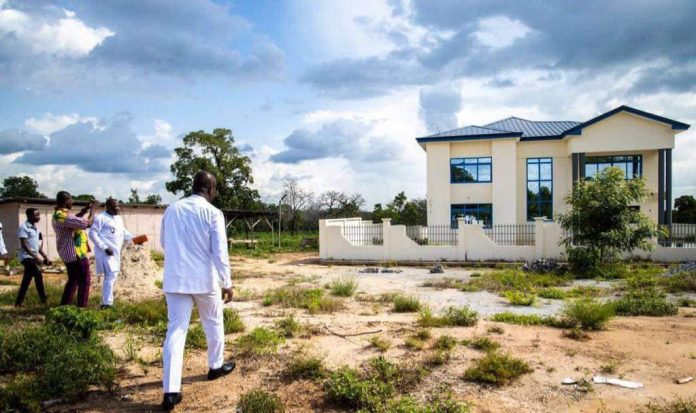 The Member of Parliament (MP) for the Damongo Constituency and Minister for Lands and Natural Resources Hon Samuel Abu Jinapor, has expressed satisfaction at the rate at which developmental projects are springing up in Damongo, the Savannah Regional capital after embarking on a one day visit to sites of infrastructural projects of the New Patriotic Party (NPP) government that are ongoing in Damongo, the Savannah Regional capital.

The Damongo inspected progress of work on some major public regional administrations including schools, a single High and Circuit Court complex, a Ghana Education Service (GES) Directorate and a National Insurance Authority complex which are near completion. He also visited the Damongo community centre, four bungalow apartments for the security, and a classroom block projects that are ongoing in the Damongo Constituency.

Speaking to the media after the inspection Hon Samuel Abu Jinapor expressed satisfaction on the progress of work done so far and promised to continue to work in the interest of the people of Damongo by making sure that he facilitates for the much needed development in the area.

He said the Savannah region is a new region created by President Akufo-Addo and his government and is very determined to develop the six new regions which have been created in the country so that the said regions can come at par with the existing 10 regions of Ghana to bring about the much needed rural development.

“As you can see, significant infrastructure are being undertaken in the Constituency. Courtrooms, National Insurance Authority offices, community centre and you can tell here in a community called Nabori we are building a classroom block to replace a very dilapidated classroom building here in the community”, the Damongo MP said.

He added that, President Akuffo Addo is committed and determined to bringing to the people of Damongo and the savannah region the much needed development to enhance the grow of the region.

He disclosed that, the government is also opening and creating inner roads across the regional capital, Damongo so as to open up the town for rural development.