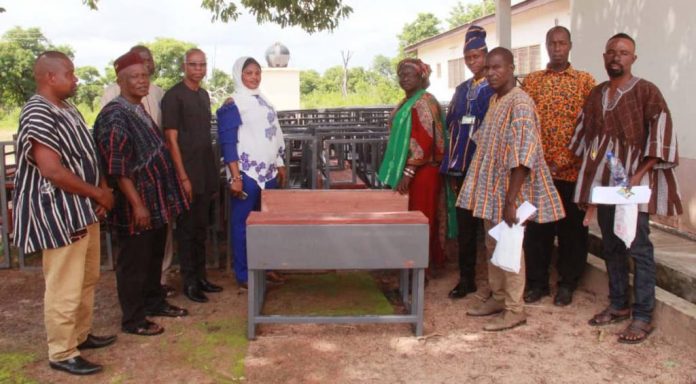 Speaking to Bole based Nkilgi fm, Madam Barkisu said education is key on her list of priorities, hence the reason she is focusing on the basic amenities that will make school going children comfortable in the Sawla-Tuna-Kalba District.

According to Sawla DCE, the desks for schools will go a long way to support school children who still sit on the floor to write, a situation she described as unfortunate.

Madam Barkisu said since she assumed office she has embarked on many projects in Education, Health & Sanitation, Agriculture and Community development to make the Sawla-Tuna-Kalba District a first class district in the country.

She disclosed that there is more in the pipeline for the good people of Sawla-Tuna-Kalba District hence they should keep praying for her to fight for the Districts fair share of the National cake.

Receiving the desks the District Director of Education for Sawla-Tuna-Kalba Madam Madam Abiba Abubakari Soale expressed her profound gratitude to the DCE for the gesture.

Madam Abibata said the desks will support in making teaching and learning easy.