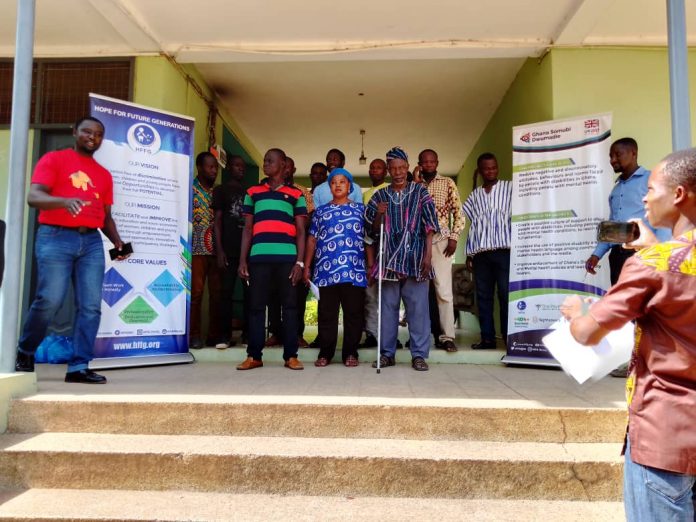 A one-day sensitisation training workshop was on 5th April, 2022 held for journalists and stake holders in the Savannah Region at Damongo on the use of positive non-discriminatory disability languages in the media to enable persons with disabilities to live to their full potential.

Mr Anthony Dogbedo, Program Manager at Hope For Future Generations (HFFG) incharge of the Ghana Somubi Dwumadie project in an interview said his organization has over the years realized that the language that is used in the media is often not positive.

People according to him use all forms of derogatory, stigmatizing and discriminating terms nd the change they want to see is for people not refer to people by their disability. He said; “For instance, referring to people with terms like deaf and mute, is offensive and should not be used at all”..

Mr Anthony Dogbedo added that he was confident that the engagement with the journalists will provide a good foundation for further engagements with other stakeholders that will promote positive language around persons with disabilities.

Mr Dogbedo further said; “A lot of the media people themselves are not aware that these are derogatory terms. We will continue developing the document and continue sharing with the media and expect that the knowledge will be passed on to other practitioners so that together we can make society friendlier for people living with disabilities including persons with mental health conditions”.

Mr Fuseini Abdul-Rahman, the Project Officer at the Hope For Future Generations in charge of the Ghana Somubi Dwumadie project said the purpose of the program was to engage District Assemblies to see the best way to add disability and mental heal issues in their by-laws and how the by-laws will capture issues of people living with disabilities including mental health.

Mr Abdul-Rahman added;
“Disability have by-laws but they are not gazetted and some don’t even have at all so we hope district assemblies take issues of by-laws serious and then create a column that deals with issues affecting people with disabilities and mental health since that will go a long way to reduce the stigma and discrimination against people living with disability and mental health so as to enhance their potentials and allow them to grow to the level desired of every human being and they can’t do this without the media because the media carry their voices high”.

The President of the Savannah Regional Disabilities Association Mr Joshua Dramani commended the organization for the initiative in sensitising the general public about the name tag associated with disability.

The training was organised by Hope For Future Generations (HFFG) and the PsykForum Consortium as part of the ‘Social Behaviour Change Communication (SBCC) and stigma reduction for mental health and disability inclusion (Ghana Participatory SBC) project under the Ghana Somubi Dwumadie programme.

The 3-year programme is being funded by UKaid through Options Consultancy Services and is being implemented in the Greater Accra, Central, Savannah and North –East regions of Ghana.