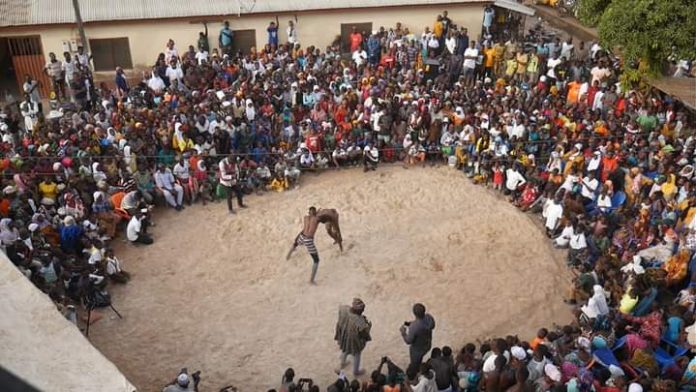 The most exciting and entertaining bout of The Shea Tree Traditional Wrestling competition was held at the forecourt of the Palace of Bolewura Sarfo Kutuge Feso (II) on 12th March, 2022.

The Kutuge Feso bout, named after the visionary paramount Chief of the Bole Traditional Area was the most attended bout of the competition thus far, with thousands of people flocking in to see the men with balls battling to represent the District in the upcoming grand finale.

For the first time, the program, chaired by Tingawura Abudu Sampson and supported by other sub chiefs from Bole Traditional Area, provided an opportunity for a young man to grab a “wife” with his strength, valor, and perseverance.

After being impressed by the fighting skills of Life Jin, the young lady jumped onto the arena and kissed him sweetly while asking him to marry her.

Many of those who flocked to the arena were calling for a fair representation of the District after Mugees of Banda Nkwanta and Life Jini of Dollar Power ended in no winner after about 40 minutes of wresting.

After much back and forth, both wrestlers will represent Bole District at the Shea Tree Traditional Wrestling competition’s grand finale alongside “Shark” of Kui who defeated Abdulai Dingara of Dollar Power.

The most exciting undercard fight was between Bole boy Kassim Nelly and Rasheed of Banda Nkwanta which also ended in a stalemate.

The Gonjaland Youth Association Congress in Daboya will host the finals on March 25, 2022.