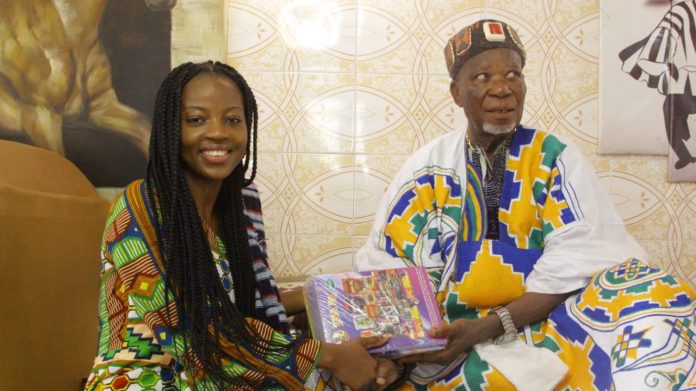 The Savannah Regional representative for the 2021 edition of Ghana Most Beautiful (GMB) Miss Arama Sulemana on Friday, February 25th, 2022, paid a courtesy call on the Paramount Chief for the Buipe Traditional Area and Vice President of the Savannah Regional House of Chiefs Buipewura Abdulai Jinapor II.

Speaking at the Palace, Miss Arama said the purpose for her visit was to express her heartiest gratitude to Buipewura and his subjects for their contribution and enormous support given her when she was vying to be crowned the winner of last year’s Ghana’s Most Beautiful pageantry show.

According to her, she was overwhelmed with the amount of support shown her by the people of Buipe and its surrounding communities.

She used the occasion to call on parents to ensure that girl child education and support is embraced in the Savannah Region because she believed that the girl child equally has the potentials to be of immense service to society when educated.

She presented over one thousand worth of books to the Buipewura Jinapor Education Fund for onward distribution to students in the Buipe township.

Miss Arama appealed to the distributors to ensure that the Buipe Girls Model JHS gets a greater chunk of the books.

On his part, Buipewura Jinapor II, heaped praises on Miss Arama for putting up a stellar performance in the 2021 edition of the all women reality show organized by TV3 a subsidiary of Media General.

According to him, Arama was evicted because their enough was not good and promised to do more in subsequent editions to bring the crown to the good people of the Savannah Region.

He pledged his support to Miss Arama Sulemana and asked her not to relent in her quest to ensure that girl child education is enhanced in the Savannah Region.

According to him, girl child education and empowerment is very much dear to his heart and he will do everything within his remit to enhance education among girls in his paramountcy.

Buipewura Jinapor II aslo crowned Miss Arama with a chieftaincy title know as “Mbita Wurche” (Queen of beauty) for her show of courage and strength in the past edition of the pageantry show.

Addressing the students, she urges them to take their studies seriously and also endeavor to set goals for themselves as they strive to become better positioned in society through education.

She conveyed her heart felt appreciation to them for their support and prayers for her over the past year.