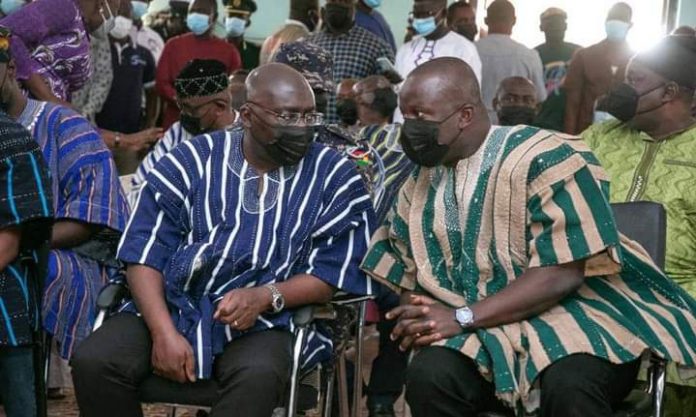 Dr Bawumia was speaking at the Jakpa Palace during a courtesy call on the Yagbonwura on 14th February, 2022 to thank him and the Gonja Traditional area for the role they played during the funeral rites of his late mother Hajia Hajia Mariama Bawumia who passed on in Accra on September 13, 2021 at age 81 and was buried in Kperiga, near Walewale in the North East Region.

Dr Bawumia thanked the Yagbonwura for the sending a delegation to mourn with his family and show of love during the funeral rites and told the people of Gonjaland that the Jakpa Palace was his home with the Yagbonwura as his father.

The Vice-President said the development of the new region is not about mere talks but action on the ground.

He said the asphalt overlay in the Damongo township is the first of its kind in the region with lots of development ongoing in the region.

He further mentioned that the Damongo water project will kick start soon since water is the biggest problem in the Damongo municipality.

He hinted of coming to the Savannah Region to cut sod for the construction of an inland port at Debre in the central Gonja district of the Savannah region.

The Member of Parliament (MP) for the Damongo Constituency and Minister for Lands and Natural Resources Hon Samuel Abu Jinapor in an address recounted how they were mocked by their opponents at the Palace that Nana Addo can relocate to the Palace, he won’t win the Presidency yet the skins of the Jakpa Palace stood behind them in 2016 and in 2020.

The Damongo MP said the Dr Bawumia has served Ghana and will also be served, adding that the New Patriotic Party (NPP) government did a lot for the region.

Yagbonwura Tutumba Boresa (I) who spoke through his linguist Alhaji Afuli described the Vice-President as respectful and very humble who he will always pray for and keep blessing him for all that he is seeing in his kingdom.

The linguist of Yagbonwura said the MP for the Damongo Constituency is also performing well and setting records interms of development which he is very proud of.