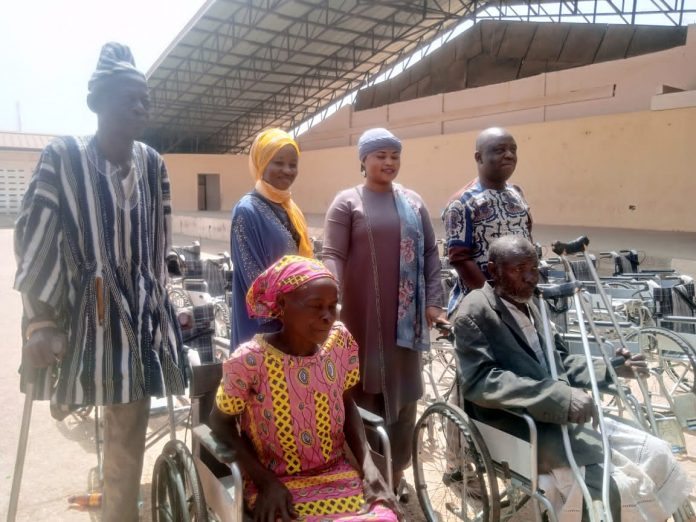 The Sawla-Tuna-Kalba of the Savannah Region in collaboration with the Social Welfare office held a disability durbar at the Sawla community centre on 3rd February 2022 to donate items to physically challenged persons in the district.

The items which were purchased with 3% of the District Assembly common fund allocated for persons living with disability include one (1) Apsonic Aloba motorbike, Six (6) new laptops, thirty (30) wheelchairs, Seed Capital for some selected physically challenged persons and Cash support for physically challenged students in the district, Four (4) beaking Ovum with Cylinders and Two (2) Soap making machines.

The District Chief Executive of Sawla Tuna Kalba District, Madam Losina Barikisu Watara in her key note address extended her gratitude to all stakeholders who helped organised the durbar and that the durbars will give citizens the opportunity to update themselves on progress made by the government with regards to the disbursement of the three percent share of the assembly’s common fund.

She added that the New Patriotic Party (NPP) government in it’s 2020 manifesto promised transparent and accountable governance, strong economy, investing in the people and expanding infrastructure for growth.

Madam Losina Barikisu Watara said the Sawla-Tuna-Kalba district assembly has resourced Persons Living with Disability (PLWD’s) with reasonable amount of money as start-up capital to enable them venture into income generating businesses and that as an assembly, they have the strong believe that the future of every society depends on how leaders handle their vulnerable groups.

“Undauntedly, people with disabilities are vulnerable but possess so much potentials and talents and when harnessed would help develop the society” the DCE said.

Speaking to Bole based nkilgi fm in a brief handing over ceremony in Sawla the Sawla-Tuna-Kalba district Social Welfare Office Madam Fridaus Musah Yakubu acknowledged all stakeholders and said it is a routine exercise they do every year to support the physically challenged persons by accessing their needs and using the three percent District Assembly common fund to support them.

Madam Fridaus added that her office is ready to partner all stakeholders to bring smiles to the vulnerable.

She said the items will go a long way to enhance the mobility and capacity of the beneficiaries. She said carefully studied the need base of the physically challenged persons before providing the items.