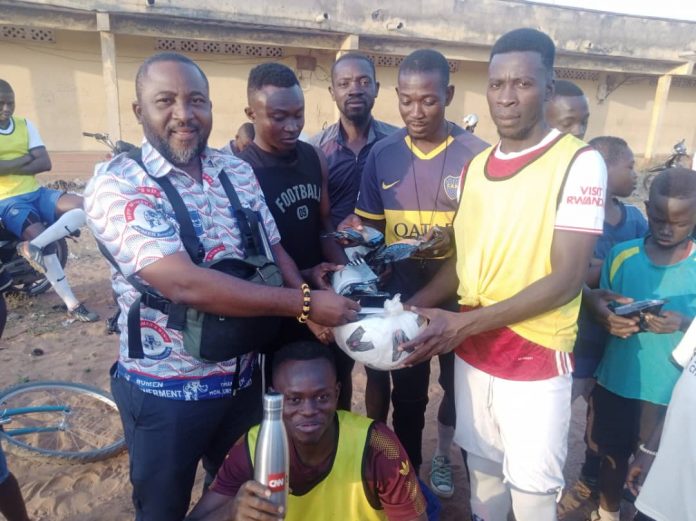 The presentation was done on Wednesday, January 26, 2022, at the Damongo town park.

In a short address Saeed Benjamin Wedjong said he believes football is a very important tool towards reducing youth unemployment in the country, and promised to work closely with sports authorities in the Damongo Constituency to promote the interest of the youth in the constituency in all fields including football.

”I have been a football fan since childhood, I played football at the basic level in school and ready to promote the growth and development of football in the Damongo constituency; he said.

He added;
I’m contesting this position to help the youth of the area realise their ambitions and I will work with leadership to make sure football and sports in general is supported to grow and develop well in the constituency, to raise the image of the Damongo and the Savannah region’ he added.

Saeed Benjamin Wedjong disclosed further that when given the chance to lead, he will relate well with authorities of the party to secure scholarships for the youth of the party to further their education and gain the necessary skills to take up leadership positions.

He said he will also appeal to the New Patriotic Party (NPP) leadership in Damongo, the Member of Parliament (MP) for Damongo, the West Gonja Municipal Chief Executive (MCE) and the Savannah Regional minister and to consider the youth when appointing caterers for the school feeding positions.

He added that he will assist make the NPP a youth based party and the most powerful and viable institution in the area that will attract the youth of other political parties to join the NPP.

Saeed Benjamin Wedjong appealed to the Damongo NPP constituency executives, zonal coordinators and branch executives to vote massively for him to become the next NPP Youth organiser in the Damongo Constituency since the party needs people like him to lead the youth in order to relate well with the other executives to capture young ones for the party.

“We want to break the 8, this can only be achieved when we get people like me to lead the youth front of the party. Together with other executives we will make the NPP more appealing to teenagers so that by the time they attain 18 years, they will choose NPP as their party for life”; he added.

The general captain of Mole Nationals FC Kraja Jalil Carlos on behalf of the club expressed gratitude to Saeed Benjamin Wedjong for the timely intervention, saying “if all the aspirants had come to support Mole Nationals fc, the team wouldn’t be where it is today”.

“We need the money to pay for the registration of players and the two footballs and shinguards will also help us improve our football skills to compete well in the upcoming division two (2) league season”; he added.

So far two other persons including the NADMO Coordinator for the West Gonja Municipality and a Teacher from the Larabanga community have declared their ambition to contest the potions of Youth Organizer of NPP in the Constituency.

The election is slated to take place in March this year.