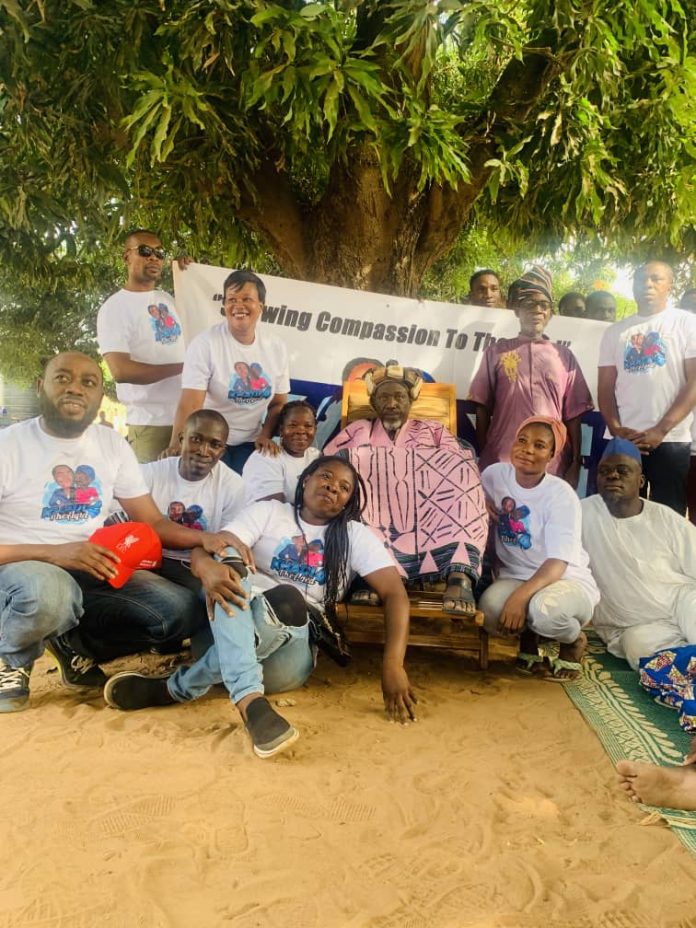 A non- governmental organisation, Khadi4TheAged Championed by USA based Miss
Khadijo Sofo aka DJ Khadii has embarked on a sensitisation tour on Ghana’s constitution’s day to Kafaba, a farming community in the East Gonja Municipality of the Savannah Region.

The sensitization tour which is focused on how the youth should recognise their aged parents, accept them in their current state as part of growth and also understand their vulnerabilities rather than seeing them as witches and wizards had over 300 of the village folks of Kafaba led by the Chief of the community Kafabawura Seidu Yahaya in attendance.

Mr Zakariah Awusi who led the team to the Kafaba community on behalf of Miss Sofo Khadija in an address to the Chiefs and people of the area indicated that the team was in the community to sensitise the youth on some implications that comes with growth.

He said the Kafaba community was in the news in 2021 following an unfortunate incident in the area leading to the death of a 90 year old woman (Akua Denteh) which he appealed to the youth to handle the issues of old age with care since it is the young that grows to be the aged.

Mr Zakariah thanked the Chiefs and people of the area for the warm reception and the audience given to the team and assured them that the founder of Khadi4TheAged will be in the community anytime she happens to be in Ghana.

Miss Rahinatu Sofo, younger sister of Miss Khadija Sofo and member of the team also in a speech said old age comes with so many issues including the aged sometimes talking to themselves which the youth sometimes sees as strange labeling them as witches and wizards.

She spoke on dementia and described it as a group of conditions characterisAed by impairment of at least two brain functions, such as memory loss and judgment with those suffering from dementia experiencing symptoms that interfere with daily functioning, finding themselves unable to remember, reason, or make decisions which the youth sometimes sees to be acts of witchcrafts.

“We advised the youth not to see such people as witches and wizards but try as much as the could to assist them”; she said.

The Chief of Kafaba, Kafabawura Yahaya Seidu thanked the team for the sensitising of his community on issues of the aged.

He said the unfortunate incident happened at his blindside assured the team that nothing of that sought will ever happened again in his area.

He indicated further that the presence of the Khadi4TheAged team soundly bolstered the morals of the community and therefore used the opportunity to thank the team for choosing Kafaba since the visit will go a long way to assure the world that Kafaba is peace loving and respects the aged.

The Chief further mentioned some few developmental challenges affecting the area which include bad roads network from the Salaga township to the Kafaba community and also the lack of a health center in the area as a major problem affecting his people and therefore used the opportunity to call on developmental and the government to help address the issues for his community.

He further disclosed that the Kafaba community has huge fertile lands for farming purposes which with the support of the government can help solve the unemployment situation in the area.

Some aged women present at the gathering also complained about trade and medical complications due to the lack of proper medical facilities available to take care of them.

Meanwhile, Khadi4TheAged has promised the chiefs and people of the area to be a partner in care giving and protection of the aged rights in all communities including Kafaba.

Khadi4TheAged is a non-profit corporation whose mission is to spread awareness of, and sensitivity about, the afflictions that plague the elderly around the world with the express purpose of alleviating the suffering that these cherished members of society are experiencing.

Khadi4TheAged will support foundations and programs designed to educate the youth of the world about the ailments that older people often suffer from in order to quell the abuse too often visited on senior citizens who suffer from dementia, including Alzheimer’s disease. Sadly, the elderly who are afflicted with mental illness are routinely abandoned, humiliated, physically abused (even beaten to death), and generally tormented by younger people whose understanding is clouded by superstition and false beliefs. Young people often believe that the dementia suffered by the elderly are caused by spirits. They are not aware of the medical causes of these conditions. This problem is particularly acute in the developing world.