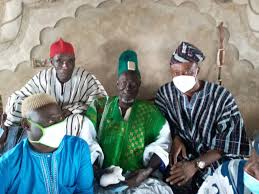 The Member of Parliament (MP) for the Bole- Bamboi Constituency, Hon. Alhaji Yusif Sulemana on 7th January, 2022 paid a courtesy call on the Bolewura Sarfo Kutuge Feso (I) at his palace in Bole.

The MP his address to the Bolewura and his Elders said he was at the palace to check on the well-being of the chief and to also thank him and his elders including Queen mothers for the continuous support they have offered him over the years.

Hon Alhaji Yussif Sulemana used the visit once again to call for concerted effort towards working to see Bole District raised to the status of a municipality, adding, that time is overdue for Bole District to be given municipality status.

A three member committee comprising of the Gbelimpewura Sarfo Amantana, Tingawura Alhaji Samson Seidu and Bugewura Mumuni were tasked to forward a petition to the minister of local government regarding the request for municipality status for the Bole District Assembly.

The MP again bemoaned the need for the traditional area to step up effort to stem the nefarious activity of Fulani nomads around the traditional area adding that throughout the second leg of his thank you tour, there has been complains across most of the towns visited about the destruction of farm produce by Cattle herded by Fulanis.

The MP reminded the Bolewura and his Chiefs of a draft blueprint he submitted to the traditional council concerning cattle ranching and zoning regime in and around the Constituency to which end the Bolewura suggested for a wider consultative forum in order that a balance can be striked between control measures and existing ECOWAS protocols of free movement of goods and services.

The MP on the sides of the visit, donated 31 cloths to the Bolewura to be given to his queen mothers in appreciation of their unalloyed support they offer to the traditional area.

The Bolewura and his queen mothers were full of thanks to the MP and his entourage and pledged that his doors remain widely open to the MP any time issues of development arise.