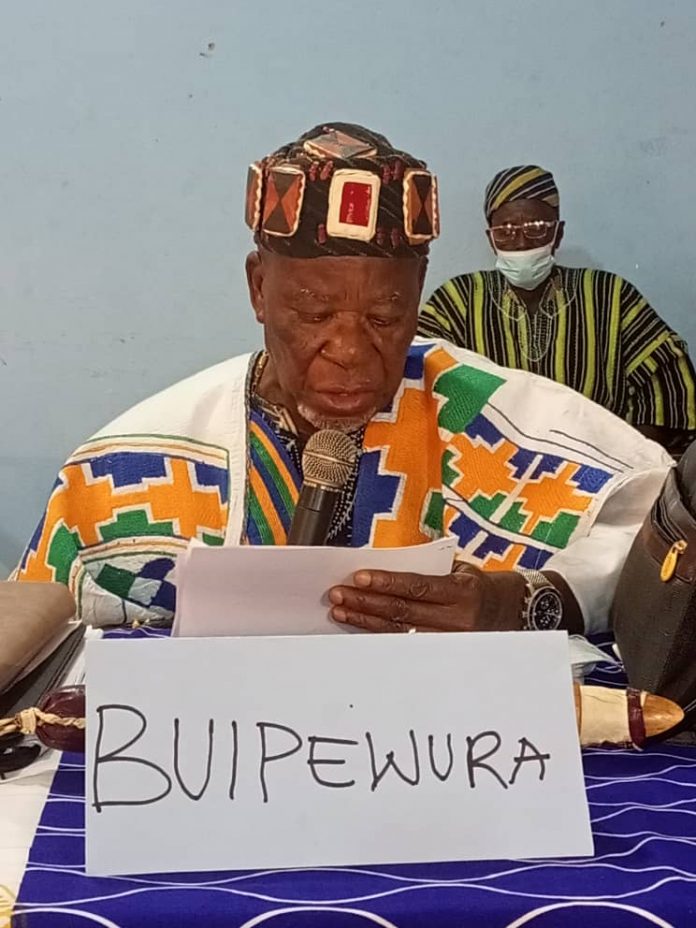 The President of the Savannah Regional House of Chiefs and King of the Gonja Traditional area Yagbonwura Tutumba (I) has tasked the standing committee of the house the House to explore all necessary avenues to get the matter of the Damongo chieftaincy issue settled once and for all since the house is incomplete without a substantive Damongowura being a member of the house.

A 3 member committee headed by the Kongwura and supported by the Kikpandewura and Naa Agba Jaga of the North Mo traditional area has been constituted to find a lasting solution to the issue.

Buipewura appealed to the two feuding functions to cooperate with the committee in the 3 month period and also accept the outcome of the committee but was quick to add that the issue can further be taking to the national house of chiefs by the looser of the case if he is not satisfied with the outcome and can further it to the Supreme Court.

On the issue of commercial charcoal business in the region, Buipewura Jinapor extended a passionate appreciation to the chiefs for making sure the ban on commercial charcoal activities leaving the shores of the Savannah Region for an ample restoration of the vegetation cover adding that each and every one of the chiefs played his or her part to collectively overcome the vegetation canker.

He further indicated the attention of the chiefs being drawn to the fact that, the Fulani settler activities across the Savannah region remain a bigger concern for the people of the region and therefore entreated the House especially the standing committee to put mechanisms and strategies in place to find a way to manage efficiently the Fulbes in the Savannah region.

Buipewura added;
”For every bodies positive contribution in the region speed up development of our infant Savannah region”.

He further said; “Let’s not play the Ostrich. I conclude on the Fulbe matter that as we enter the new year, by close of January the House should have stakeholder dialogue with the leadership of the Fulbes”.

Buipewura said he as the Vice-President of the Savannah Regional House of Chiefs is very happy for the good work of the House so far and further extended his profound gratitude to all regional and districts heads of departments for their contribution to the development of the Savannah region.

He said Damongo has been without a substantive Chief for over 5 years today which has a derailed development in the in the Savannah Regional capital and that it is currently difficult to acquire plots of land in the area due to the chieftainship issue.

He said the call by the Savannah Regional house of chiefs to resoolve the issue will see the regional capital develop at a faster rate as investors and other bodies are moving away from the area.

Meanwhile the Buipewura has described 2022 as an action year for the house as many activities are lined up towards the development of the region and settlement of all disputes in the region.