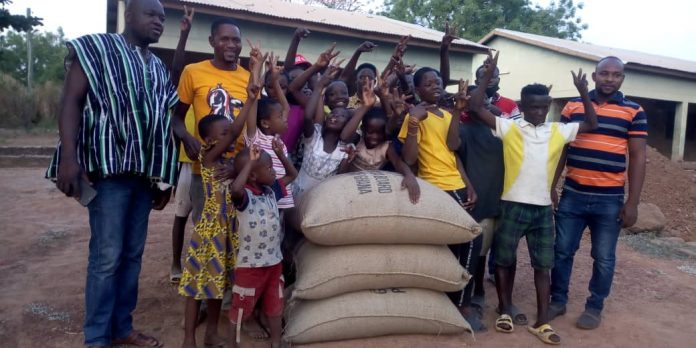 The management of Boresa farms in Damongo has on 28th December, 2021 donated 3 bags of Maize to the Redemption Children’s Home in Damongo, the Savannah Regional capital.

The maize which was presented to the home by the Registrar of the Savannah Regional House of Chiefs Mr Abutu Kapori in a short ceremony said the farm which belongs to a group of people will continue to make donations across the region in the subsequent years.

He said a similar donation was made to the Sawla Children’s Home and it is the wish and pledge of the farms to always remember the children of the homes by putting smiles on their faces always.

Chief executive officer and caretaker of the Damongo Redemption Children’s home, Pastor Abraham Lermu thanked the management of the Boresah Farms for remembering the kids especially in this festive season.

He said the home is able to come this far through the contribution and support of philanthropist which he is very much grateful.

He added that some of them are currently well established in the community and doing very well.

Pastor Abraham was however quick to add that much is still expected for the upkeep of the home and therefore appealing to the general public, philanthropists to come to their aid by donating and emulating what Boresah Farms for the smooth ranning of the orphanage.

Miss Becky, an inmate of the home thanked the management of Boresah farms on behalf of his colleagues for the kind gesture.