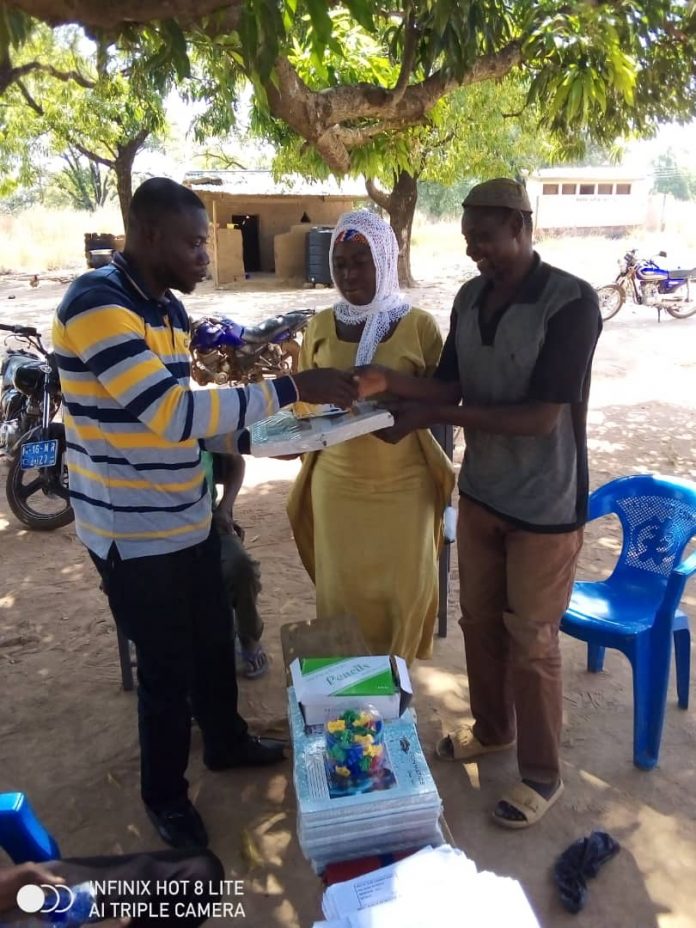 The Assembly man for the DASS- Broto electoral area in the West Gonja Municipality of the Savannah Region Hon. Mbigamsi Mugeez has donated 100 pieces of text books to the Broto Primary School.

Hon. Mugeez apart from the books also included pencils, sharpeners and pens to the be distributed to the pupils of the school.

The Assembly man during the short ceremony on 29th November, 2021 to present the items said his major priority in the electoral area is the education of the children in the area and has set aside an award scheme to reward the brilliant but needy in his electoral area.

He said students who top in the end of term exams will receive school uniforms, sandals and cash amount of money.

He also promised to forward to the authorities in the municipality the concerns raised by the chiefs and people of the Broto farming community which forms part of his electoral area.

A resident of the community, Mr Bartholomew Zorni on behalf of the chiefs and opinion leaders of the community thanked the assembly man for the kind gesture but was quick to remind him to remind the MCE and Member of Parliament (MP) for the Damongo Constituency Hon Samuel Abu Jinapor about the bad nature of the road leading to Broto which the Chief of the community collaborated and emphasized on.

He also spoke about an abandoned CHPs compound which the contractor had left uncompleted.

He explained that members of the community and other nearby communities access health care at Yipala which is a distance away from the village and therefore appealed for the completion of the facility.

Mr Bartholomew further appealed to the assembly man to also talk to the the Overlord of the Gonja Traditional area Yagbonwura Tutumba Boresa (I) to look into the menace of Fulani herdsmen destroying the farms with their animals.

Hon. Mugeez assured them of bringing to the notice of who ever matters to make the Broto a better place for farming for them.