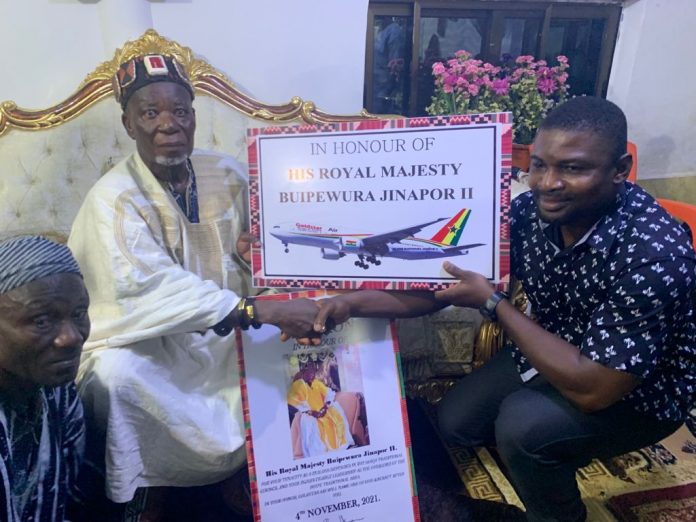 An International Airline company Goldstar Air which is getting ready to operate in Africa and 12 other destinations in Europe, Middle East, Asia Pacific, the Caribbean and North America has not only present a citation to the Paramount Chief of the Buipe Traditional Area of Gonja, Buipewura Abdulai Jinapor (II) but has named one of their 100 modern aeroplanes after him.

The citation from Goldstar Air Wings of Ghana presented to the Buipewura on 4th November, 2021 at the his Palace reads; “His Royal Majesty Buipewura Jinapor II. For your tenacity as a zealous Defender in the Gonja Traditional Coukand your Indefatigable As The Overlord of the Buipe Traditional Area, In Your Honour Goldstar Air Will Name One of Our Aircrafts After You. 4th November, 2021.
Signed…Eric Alfred Bannerman, Executive Chairman/ CEO”.

Speaking after presenting the citation, a representative of Goldstar Airlines Alhaji Hamza Saaka said they were in Buipe to provide Personal Protective Equipment (PPEs) as part of their contribution towards the Buipe Damba Festival 2021 ans to inform Buipewura Jinapor they are naming one of their aircrafts after him and to as well notify the Buipewura of how they would collaborate and work efficiently and effectively with the communities under his jurisdiction.

Alhaji Saaka said; “it is worth dying for a nation that honors its living heroes and heroines and as a result, the company believes it is appropriate to honor distinguished Ghanaians”.

Alhaji Hamza Saaka disclosed that; “Goldstar Air will construct a 250 x 250 x 75 hangar in the northern regional capital of Tamale for aircraft maintenance and refurbishment, as well as use the Tamale airport as our second hub. The airline is planning the Goldstar City project, which will be located in Tamale and will contain housing, a training school, and other amenities for our engineers, pilots, cabin crew, and other staff”.

The Representative of Goldstar airlines added; “When fully functioning, this facility will create new commercial prospects while also promoting northern Ghana to the rest of the world”.

Alhaji Hamza Saaka stated; “Your Majesty I am pleased to announce that Goldstar Air plans to have a fleet of more than one hundred (100) modern aircraft serving a network of more than ninety (90) key business and leisure destinations throughout Europe, the Middle East, Africa, Asia Pacific, the Caribbean, and North America”.

“Our goal as Ghanaians is to create a cutting-edge aviation sector capable of competing in worldwide markets in terms of safety, quality, dependability, timeliness, efficiency, and prices”; he added.

He further said; “I am pleased to announce that Goldstar Air will feature seventy percent local content, including Ghanaian food, music, movies, and announcements in Ghanaian languages, with a language from the north prominently featured, and will also export trained labor through agency on call, charter, and aircraft leasing”.

An elated Buipewura Jinapor speaking after the citation was presented to him said the award is not for him alone but all his sub-Chiefs and the District Chief Executive (DCE) for Central Gonja.

He said many people prefer Air travel from the Northern part of Ghana to Accra but it seems the aircrafts are not enough citing the case of Africa World Airlines owned by to his friend Togbe Afede which flies sometimes five times a day but demands for tickets keep increasing.