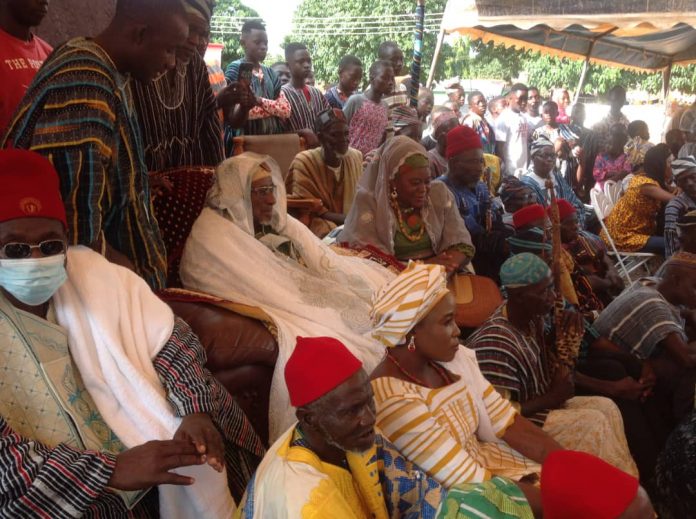 The King and Overlord of the Gonja Traditional area Yagbonwura Tuntumba Boresa (I) has applauded the people of the Gonja Kingdom for maintaining peace over the years.

Yagbonwura Tutumba (I) in an address on 23rd October, 2021, at the forecourt of the Jakpa Palace during the grand Durbar of this years Damba festival urged the people in the Savannah Region to see peace as an asset and prerequisite for development since without peace there can never be development.

He reminded the people of the Gonja Kingdom to have it at the back of their minds that anybody who will fall short of the laid down principles following the successful end to charcoal burning, commercial wood harvesting and illegal logging activities will have himself or herself to blame and commended the Member of Parliament (MP) for Damongo constituency and Minister of Lands and Natural Resources Hon Samuel Abu Jinapor for his efforts in restoring the vegetation cover of Ghana after it’s depletion.

In the area of education, the Yagbonwura said it is very sad statitics on education released last year indicates the Savannah Region performed very poorly.

He said efforts must be put in place as soon as possible to enhance an improvement in the education sector.

The Yagbonwura further used the opportunity to congratulate all government appointees in Akufo-Addo led government from Gonjaland and advised them to serve with their hearts and minds to make the infant Savannah Region proud and to create avenue for future appointments for sons and daughters in the region.

The Overlord of Gonja used the opportunity to appeal to the Assembly members of the Bole district Assembly and the East Gonja Municipality to in the name of Sumaila Ndewura Jakpa (founder of the Gonja Kingdom) forgive and forget all internal wranglings and consider development first by confirming the nominees of the President for the second time.

He also reminded the Savannah Regional minister and all appointees of the government to facilitate the water project completion to make sure the perennial water shortage in Damongo and it’s environs becomes a thing of the past.

The Savannah Regional minister Mr Saeed Jibril Muhazu in a short speech said he was very happy the issue of education has been raised by the Overlord of Gonja, and that all hands are on deck to solve the issue.

He said the Savannah Region in the last ranking was 16th out of the 16 regions in terms of performance which needs serious attention to be able to catch up with the other regions and assured the Yagbonwura that efforts are being made to resolve the poor standing of the region.

The MP for the Damongo Constituency and Minister for Lands and Natural Resources Hon. Samuel Abu Jinapor who was the guest of honour for the occasion thanked the people of the Damongo Constituency for a very peaceful election and the opportunity given him to contribute his quota to the development of Gonjaland, his constituency and Ghana and assured everyone present that there is a lot to be done in the infant Savannah Region which he believes the current government will put much efforts since the region was created by the current New Patriotic Party (NPP) government.

The Damongo MP said the opportunity given to the people of the region to serve in the government is unprecedented and that alone is sign of pushing development to the region.

He disclosed to the Yagbonwura and the people of the Damongo Constituency that a regional hospital and a University projects will soon kickstart with the water project not left out.

He also assured the Yagbonwura that the Damongo water project as promised is coming with full force as compensations for affected persons has been paid with actual work starting as soon as possible whilst tankers will also be deployed into the Constituency by the Ghana water company to supply water for residents especially in Damongo and it’s environs.

He added that the era of political differences are over and all that is needed now is development to better the lives of the people.

Meanwhile the MP for the Damongo Constituency Hon. Jinapor and the former President of Ghana John Dramani Mahama donated quantities of bags of rice and cash to support the Yagbonwura for this year’s damba festival.