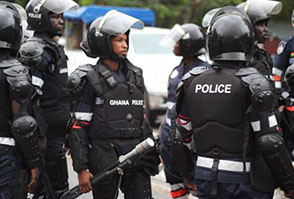 Bono East Region Police escorting two armed robbery suspects to a location of other armed robbery accomplices hiding weapons near Bole in the Savannah Region exchanged fire with the suspects after the open fire on the police while on a footpath to retrieve some weapons.

The police returned fire and in the process bullets hit suspects from Sawla called Iddrisu and Dramani Iddi who fell and bled profusely and later died at the Jemma Hospital in the Bono East Region.

The other suspects including suspect Ali Igudu however managed to escape into a nearby bush.

The facts obtained by Bole based Nkilgi FM are that, on the 20th October, 2021, a team of Personnel from the Police Intelligence Directorate arrived in the Bono East Region and met with some informants at Kintampo.

The informants informed police of the suspects behind the recent Highway Robberies and Kidnappings within and around the Bono East and Savannah Regions especially Bole, Banda Nkwanta, New Longro and their adjourning communities.

Following the intelligence at Kintampo, the team proceeded to Sawla in the Savannah Region, and while there, the team had tip of that, one Ali Igudu a notorious armed robber and the leader of the robbery gang in Sawla who together with others robbed and murdered Alhaji Ousman Amadu at Nyame Sikri, a village near Bole were hiding in a location and mobilising other robbers to embark on another robbery along the Bole to Banda- Nkwanta highway.

The intelligence also indicated that suspect Ali Igudu after robbing and murdering Alhaji Ousman Amadu, also murdered Fuseini Galagala an informant who assisted police to kill one of his accomplice and arrested one other in that robbery and murder case.

The police team swiftly moved to the said location at Sawla and arrested Ali Igudu who told the police on interrogation that the weapons they use in their robbery expeditions were with suspect Iddrisu.

Suspect Iddrisu also told police that the weapons were with suspect Ali Dramani at Bole Sawaba.

The team proceeded and arrested suspect Dramani Iddi at Bole Sawaba and on interrogation he admitted and told police he had gone to hide the weapons at foot path at the outskirts of the Bole along the Bole to Banda-Nkwanta road due to their pending operation.

Whilst the police were escorting them to the said location at Bole to retrieve the weapons, their accomplices had information about the arrest and the presence of strange vehicles and became alert due to a call placed to them.

When the Police team got closer to the location near Bole, the suspects asked police to stop the vehicles and walk with them as the vehicles could not be driven through the foot path.

When the Police team escorting the suspects got closer to the location, their accomplices immediately opened fire on the police and in the midst of the confusion, the suspects who were leading police suddenly ran into a nearby bush in different directions.

The police tactically returned fire and in the process bullets hit suspects Iddrisu and Dramani Iddi who fell and bled profusel and the other suspects including suspect Ali Igudu however managed to escape into a nearby bush.

Whilst the team was conveying the injured suspects to the Jemma Government hospital for treatment, suspect Dramani Ali mentioned his accomplices as Ali Igudu and Iddrisu who are all Fulanis.

Suspects Iddrisu and Dramani Iddi were pronounced dead on arrival by Medical officers on duty at the Jemma Government hospital.

The bodies of the deceased suspects have been deposited at same hospital mortuary for preservation and autopsy while efforts are being made to locate suspect Ali Igudu who escaped with gun shot wound for his arrest.

Meanwhile the general public in Savanah Region is advised to report to the police any person or persons who may show up at any medical or traditional healing facility with gun shot wounds for treatment for his arrest and investigations.

The Savanmah Regional Police Command is yet to comment on the issue.