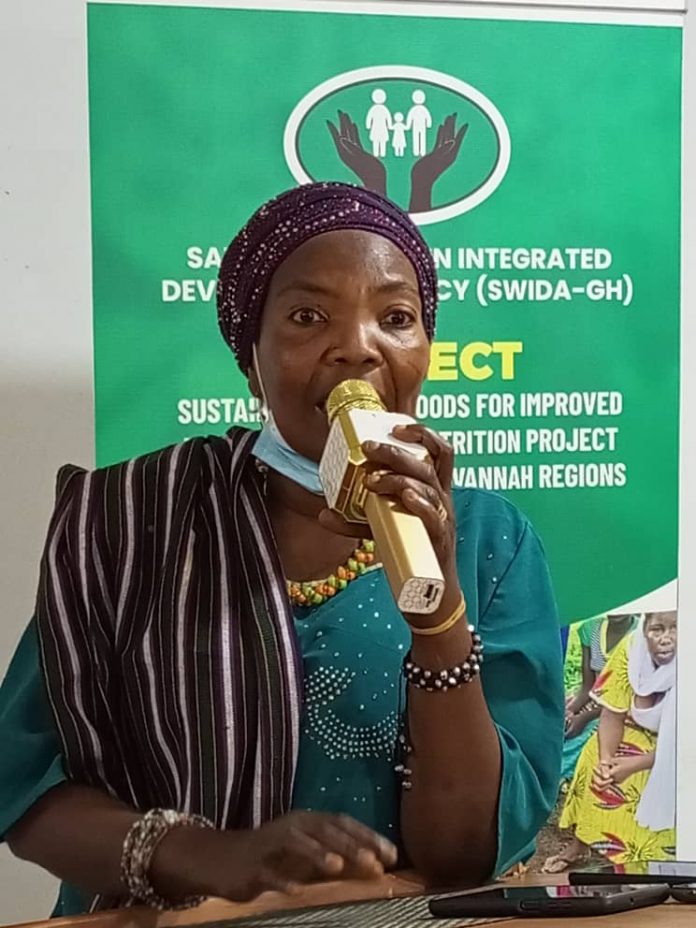 The Savannah Women Integrated Development Agency (SWIDA GH) in collaboration with the world food programme has launched the Sustainable Livelihood for improved Food Security and Nutrition programme in the Damongo municipality of the Savannah region on 22nd October, 2021.

SWIDA GH is a gender and human advocacy organisation which aims at contributing to improving the socio-economic lives of the people through access to basic social and economic opportunities and rights with funding from the World Food Programme (WFP).

The Executive Firector of SWIDA GH, Hajia Alima Sagito Saeed addressing participants during the launch said SWIDA GH is a nongovernmental organization that is into women empowerment where the plight of the woman is at the center stage as far as value chain for food is concern.

She disclosed that the programme is much focused on women and it is in partnership with the World Food Programme (WFP) since women have always been at the center of change when it comes to food, adding that SWIDA GH has been doing a lot on the ground and decided now to put out the best practices by using the Village Savings and Loans Groups with already existing women groups through which they can impact on them with knowledge and to further take them through each of the value chain agricultural processes by breaking down the processes to the understanding of the women.

“This is a pilot project that has been accepted by the women with all seriousness that needs the contribution of all and was designed incollaboration with the world food programme that has existed in other areas with sensitization that seeks to tackle food security and nutrition for sustainable livelihood and resilience against stocks that may be coming their way as women”; Hajia Alima Sagito Saeed explained.

She disclosed further that once the groups get to understand the processes, they can be able to raise what Savannah women integrated development agency is looking for by saving more and to increase their outputs at which point they will now link serious issues of nutrition to it where they can get good productions with the best practices and processes.

A representative of the World Food Programme Mrs patience Asiedu in address to the participants indicated that the way food is produced, processed, transported, consumed disposed off has an impact on the climate thus, breaking down the food system and also when there is drought and floods, the food that is produced do not yield much which ends up in hunger and malnutrition.

She further disclosed that, the UN has held two conferences already this year to discuss about food systems and climate which are critical to women.

She added that there is an upcoming conference on climate change that will connect world leaders to change the way we do things that affect the climate.

She stated further that in achieving gender equality and empowering women in the midst of this crisis is a critical element in the fight against extreme poverty, hunger and malnutrition.

Mrs Aseidu indicated that on the average, women make up more than 40% of the agricultural labour force in developing countries ranging from 20% in Latin America to 50% or more in Africa and parts of Asia, yet women headed households have generally been identified to have the least ownership of lands, limited access to resources, lower income levels and to be more food insecured which predisposes our women and girls to inequalities in food and nutrition security and the fact that the covid-19 pandemic could affect their vulnerability, calls for gender responsive interventions for the rural woman who are disproportionally affected adding that it is well known that when the income of women rises, it turns to invest more in the nutrition, health and education of their families a reason for which the world food programme (WFP) is committed to supporting efficient, resilient and inclusive food systems in Ghana not only to provide good nutrition to the populace, but to improve the livelihoods of actors along the agricultural value chain especially women.

‘Sustainable Livelihood for Improved Food Security and Nutrition’ in the Northern and Savannah regions of Ghana is being implemented under SWIDA GH with the aim of empowering women farmers to be economically resilient to withstand food and nutrition security shocks through value chain activities in crops, shea plantation and agroforestry as complementary income generating ventures and also aims to improve equitable access of women and girls to social services and currently being implemented in six districts; Mion, Savelugu, Nanton, West Gonja, Tolon and Kumbungu.