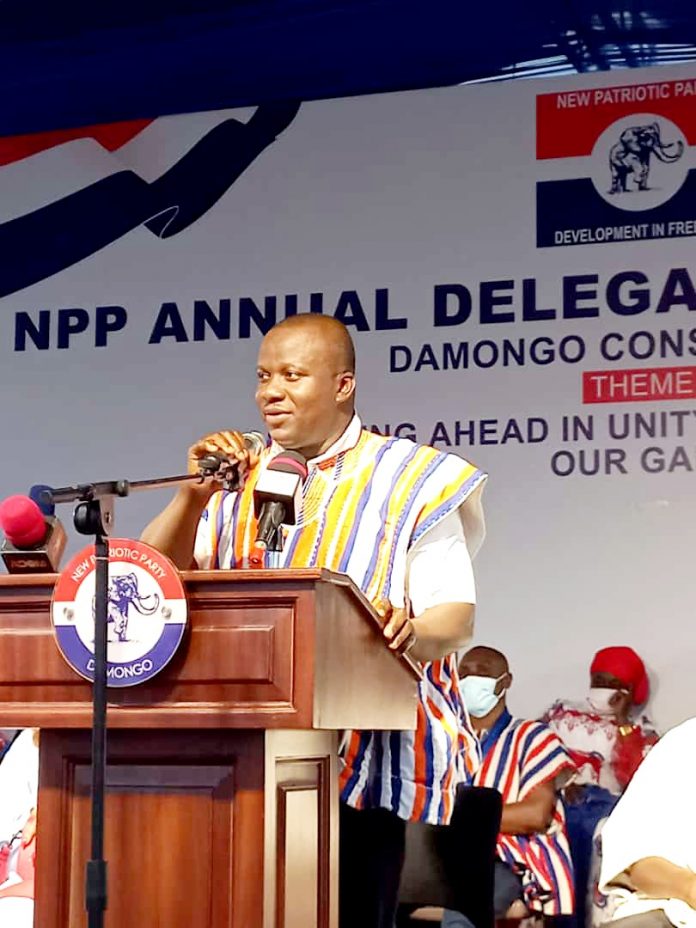 The Member of Parliament (NPP) for the Damongo Constituency and Minister for Lands and Natural Resources, Hon Samuel Abu Jinapor has assured the leadership of the New Patriotic Party (NPP) in the country that his Damongo Constituency will contribute greatly in breaking the 8 years of Ghana’s political cycle by making sure another NPP President is sworn in after Nana Akufo Addo in 2025.

In an address at Damongo during the Annual delegates conference of the party in the constituency held in Damongo on Friday 3rd September, 2021, Hon Jinapor said the NPP remain the best political party in Ghana with the best of national policy implementations and execution that has transformed Ghana sector by sector leade to the overall development of the country.

Hon Abu Jinapor stated that he lead a solid team in the 2024 elections to win more votes in the Savannah region and to make sure the region more especially the Damongo Constituency contributes greatly in breaking the 8, adding that what the NDC saw in the 2020 general elections was nothing and will make sure more the hardwork will be done in 2024 to make sure Savannah Region becomes a strong hold of the NPP.

He therefore called on party faithfuls to remain loyal to the party and contribute ideas to help in building the party from strength to strength also maintain the Damongo seat for a longer period.

He further promised to treat not only members of the party equally but everybody in the region irrespective of political affiliation and used the opportunity to appeal to all party members to remain patient as “God’s time is the best”.

Mentioning the achievements of the NPP over the years, the Damongo MP said in Ghana’s health sector, the National Health Insurance Scheme was introduced by the NPP under President Agyekum Kufour which is still being enjoyed by millions of Ghanaians.

He also mentioned the agriculture sector with the government’s Planting for Food and Jobs being the best policy that is transforming the country’s agriculture.

The Livelihood Empowerment Against Poverty (LEAP) program according to the MP has been supporting the vulnerable in the society especially women and poor.

The 2021 Annual Delegates Conference in Damongo Constituency was held under the theme: “Forging Ahead in Unity to Consolidate our Gains”.

The Savannah Regional chairman of the NPP, Alhaji Iddrisu Sulemana aka Professor Kalamonia also in an address thanked the constituents for their hardwork and resilience during the 2020 general election that has yielded the results of snatching the Damongo seat which the NDC had occupied for a very long time.

He said many people have suffered during the fight prior to winning the Damongo seat which he knows will not go in vain.

He added that everybody will enjoy the fruit of their labour soon as he has confidence in the great NPP delivering in all that was promised them.

Alhaji Adam Braimah, Damongo Constituency Chairman also in a speech promised to work more harder and advised the NDC to concentrate elsewhere since the Damongo seat is going to be retained for a long time.

He added disclosed that the NDC in the Damongo Constituency gave up the fight months to the election 2020 and will forever drop votes in every election in the Constituency through the NPPs hardwork, togetherness and track records.