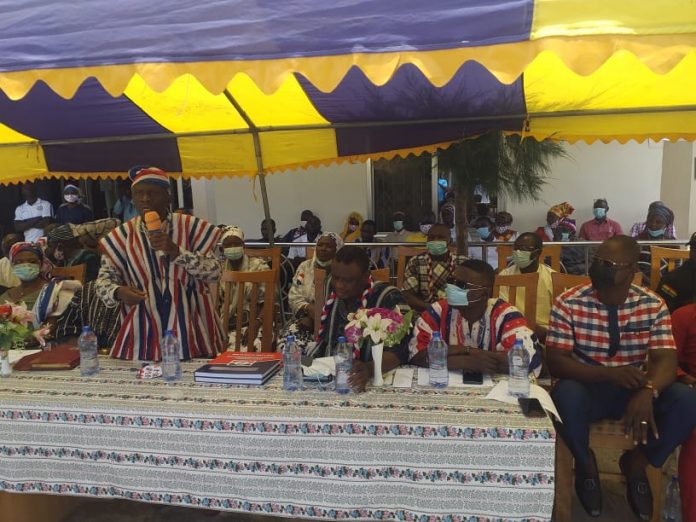 The Savannah Regional Chairman of the New Patriotic Party (NPP) Alhaji Iddrisu Sulemana aka Professor Kalamonia has hailed members of the party in the Bole- Bamboi constituency for their unflinching support notwithstanding the fact that the opposition leader of Ghana hails from Bole.

Proff Kalamonia commended party members in Bole staying loyal and that he is aware since NPP members usually “look right to left while walking in Bole” because that is the hometown of Ghana’s opposition leader and someone could hit a party members with a stick.

Also speaking exclusively to Bole based Nkilgi FM, Professor Kalamonia called party members to remain united and forge ahead to get more votes. He appealed to leadership of the party in the Bole- Bamboi Constituency to work together for a common goal.

Professor Kalamonia also touted the achievements of the NPP government in its five years of rule in Ghana as unprecedented and that the numerous policies and programs by the party is felt by Ghanaians adding that “development is happening across the Savannah Region”.

Professor Kalamonia entreated the Youth of the NPP to exercise restraint because they would be given jobs and that not all of them can be given jobs at the same time.

Earlier, some executives of the party and the Youth were agitating for employments as they believed leadership has little in addressing their needs as most of them are jobless after five years of office in the NPP government.

Reacting to the unemployment issues within the Youth of NPP in the Bole- Bamboi Constituency, the Regional Youth Organiser Mr Raphael Akati Mahama who is also the Savannah Regional Youth Employment Agency (YEA) Director, asked party members to be patient for their opportunity will come soon.

According to him, issues of unemployment will be a thing of the past as several plans are underway to create more jobs for everyone in Ghana.

Speaking to Nkilgi fm on the sidelines of the delegates conference the NPP Communications Director for the Bole- Bamboi Constituency Mr Sulemana Abdul Kadri aka Alhaji Aseiku pleaded with the Youth to be calm and not abandoned the NPP because of the ommisons of a fee individuals.

According to him, after the leadership of the party gave its speech during the delegates conference, it became clear that, no one was enjoying alone or sitting on other peoples opportunities.

He added that, some people have been saying to the electorates that “they are closer to the top” interms of lobbying but when the youth agitated for employments, the same people have now coiled back hence there is the need to work together because it is not easy to be a leader.

Alhaji Aseiku thanked Nkilgi FM for its credibility and service to all political parties.