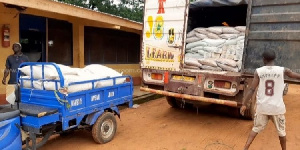 The National Food Buffer Stock Company Limited has delivered food items to the Damongo Senior High School in the Savannah Region after reports that the school was in dire need of food to feed students who often leave campus in search of food.

Speaking to the media on Friday 13th August, 2021 at the campus of the school after inspecting the offloading of a truck load of foodstuffs, the Savannah Regional minister Mr Saeed Jibril Muhazu said the school experienced the problem as a result of suppliers failing to supply the school with food stuffs.

Mr Jibril commended the National Food Buffer Stock Company for immediately intervening to salvage the situation after he spoke to the authorities of the school.

The Minister assured parents and students of the school that the problem has been duly resolved and that the right menu will surely be prepared for the students.

He added that the free senior high school program is very dear to President Nana Akufo-Addo and so he will do everything possible to make sure students do not go hungry especially in this period of Coronavirus.

He further indicated that the government has to bypass suppliers and contacting buffer stock to salvage the situation.

The Savannah Region Minister used the opportunity to appeal to the school authorities to contact him directly or buffer stock to make sure the problem doesn’t reoccur.

The Assistant Headmaster of the Damongo SHS charge of administration, chief Dramani Kipo said the situation was not as severe as the media reported and that the school was managing to feed the students.

He however said the school can now comfortably feed the students without any problem after taking delivery of the foodstuffs from Buffer stock.

Some of the foodstuffs received include quantities of maize, beans, mackerel, tomatoes, oil, rice and so on.