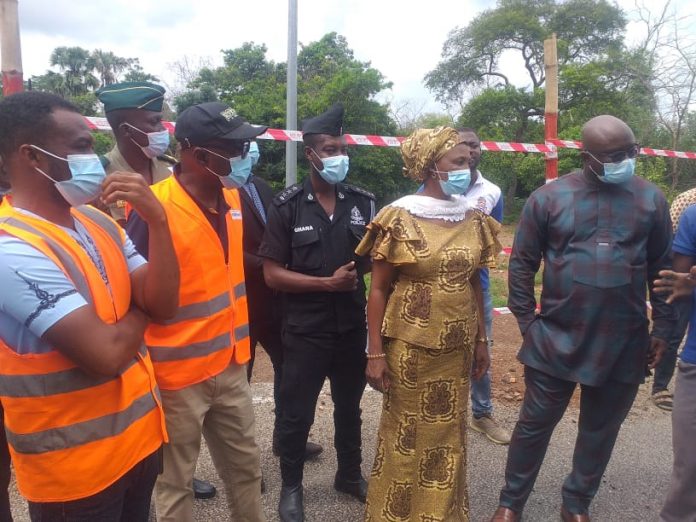 The Deputy Minister for Roads and Highways and Member of Parliament (MP) for the Pru West constituency of the Bono East Region, Hon Stephen Jalulah on Thursday 22nd July 2021 visited the Bole District stretch of the Kumasi to Wa highway to get first hand information on the situations resulting in some portions of the road being washed-away portions and to also commensurate with commuters of the road who recently had a terrible accident.

The Deputy Minister made stops at some communities on the road including Maluwe which has a Dam that is almost chopped off to interact with highways engineers as to measures that can solve the problem.

Hon Stephen Jalulah and his entourage continued to Bonbonte, Kwame Kwesi which have some dangerous places that accidents occur due to the bad nature of the road.

Speaking to the media after his final stop, the Deputy Minister for Roads and Highways said he was sent by his boss, Hon Kwaku Amoako Atta to visit the area to access the situation and to report back to to him.

He added that on 17th July, 2021 an accident occurred around Bonbonte due to that portion of road being washed off by water and thanked the Bole District Assembly and the Ghana Highways authority for their proactiveness in erecting some sticks and some safety measures to curtail the situation.

He mentioned that a contractor will come to the site and work on the road early next month.

Hon Stephen Jalulah highlighted the importance of the road and how it links several countries like Cote d’Ivore and Burkina Faso to Ghana.

The District Chief Executive (DCE) for Bole, Madam Veronica Alele Heming said she was very grateful to the Deputy Minister for Roads and Highways for honouring the plght of the good people of Bole District concerning the bad nature of the road.

She added that after the 17th of July, 202, fatal accident on that stretch of the road, she sent pictures and personally called on the sector Minister to intervene.

The Bole DCE said it was illegal for anyone to mount a speed ram without the concent of the authorities as stated clearly by the Deputy Minister for Roads and Highways Hon Stephen Jalulah.

Meanwhile the Assemblyman for Kwame Kwesi Electoral area, Hon Dery Gilbert whose jurisdiction covers the stretch of the road that has been washed away cautioned drivers to be disciplined and law abiding on the road.

According to him most of the accidents happen due to over speeding and carelessness of mostly minibus drivers that ply the road.

The Assembylan said there was the need for drivers to be cautious about overspending and unnecessary overtaking especially at that side of the road.

The Bole District Police Commander, Deputy Superintendent of Police (DSP) Benjamin Buxton said the entire District security head were at Bonbonte to provide security and to also ascertain the situation and what actually needs to be done in terms of forcing the laws and providing the necessary security guidance to the people.