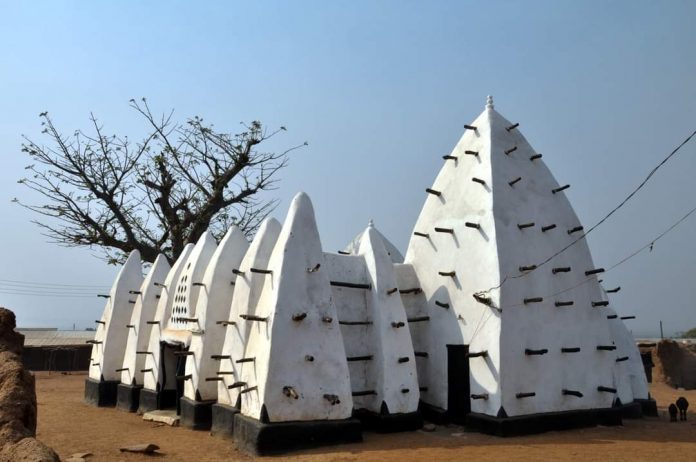 Alhaji Mumuni Mahama Zankawah was installed as the Chief Imam of the Laribanga community on 17th July, 2021.

As per the tradition of the people of Laribanga noted for its Tourism destinations, the Yidanyiri clan took over the mantle of Imamship of Laribanga after the demise of Imam Abutu of the Kundogsuri clan.

The occasion was well attended by Muslim leadership across Gonjaland, including Bole, Dakurpe, Buipe and others.

The Laribanga community has 12 clans and out of the 12 clans, five are qualified to ascend the Imamship.

Imam Mumuni Zankawah, before his ascension to the chief Imam of Laribanga was the serving Imam of Canteen, a suburb of Damongo. Imam Zankawah spent most of his active life as a peasant farmer in Canteen after he left Mole National Park where he was serving as a tractor operator.

After the traditional activities leading to the coronation, prayers were said followed by a powerful sermon from the Imams from Bole and Dakurpe.

The coronation was graced by all well meaning Gonjalanders including, the former Member of Parliament (MP) for Damongo, Hon Adam Mutawakilu, Balewura Alhaji Seidu Iddi, Tunawura Isaac Dramani Mumuni, the MP for Bole-Bamboi constituency Hon Yussif Sulemana, the Savannah Regional Chairman of the National Democratic Congress (NDC), Alhaji Seidu Moro Man Blessing and most of his executives. The New Patriotic Party (NPP) was also represented by Constituency Executives for Damongo.

Alhaji Mumuni Mahama Zankawah is noted to be a proponent of both Arabic and secular education and has been commended for bracing all odds to educate his children one of whom is a Lawyer, with others outside Ghana.

His reason for being a proponent of western education is that, his immediate supervisor at the Mole National Park treated him with disdain and never regarded him simple because he (Imam Zankawah) did not have a formal education. To this, Imam pledged to ensure his children get the best of education so that nobody will denigrate and look down on them the way he was treated at the Mole National Park.