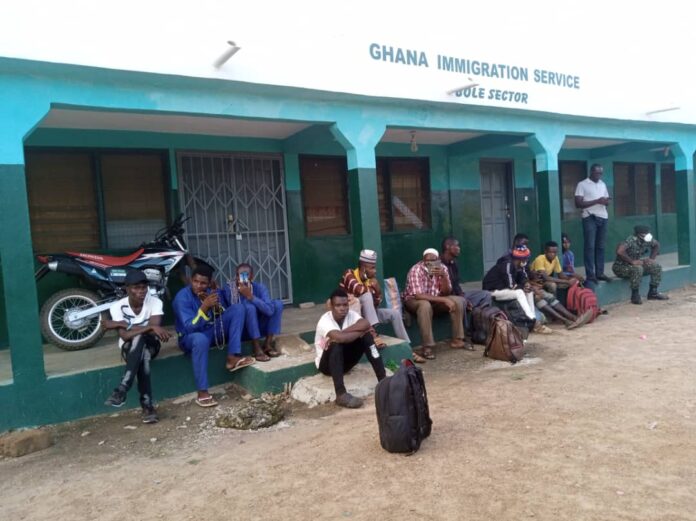 The Bole sector of the Ghana Immigration Service on 31st May, 2021 intercepted 10 foreigners who passed through unapproved roots to enter Ghana on the first day an inland check point was opened at Wakawaka on the Bole to Bamboi road.

Speaking to Bole based Nkilgi Fm, Superintendent Stephen Maxwell Adigbo who is the border patrol Commander of the Bole Sector said the barrier was opened around 12:00pm on Monday 31st May, 2021 and they were able to intercept some foreigners, who are nationals of Côte d’Ivoire and Burkina Faso.

Superintendent Stephen Maxwell Adigbo again said from interrogations, they realised some 2 of them entered through an unapproved root through the Chache area and are all Ivorians and that 8 of them are Burkinabes and some of the 8 people entered through Hamile area, whiles the others entered through the Tumu area in the Upper West Region.

He said they entered through those roots to Ghana and some were on their way to the southern part of the country.

Superintendent Stephen Maxwell Adigbo said some told them the were going to Techiman, Wenchi with others going to Banda-Nkwanta which is a small scale mining Community in the Bole District.

He explained that they intercepted 11 people and after they were done with their screening, one of them who is from Bole was to released.

He said the rest will be processed for deportation on 1st June 2021.

Superintendent Stephen Maxwell Adigbo said they will keep the people at their premises in Bole till the next morning and they will arrange for their deportation to where they all entered Ghana from.