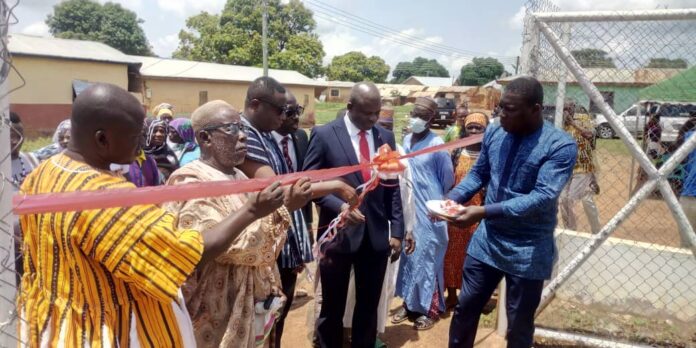 The Minister of the Savannah region Mr Saeed Muhazu Jibril has appealed to the United Bank of Africa (UBA) to open branch in Damongo, the Savannah Regional capital because the fast growing town has just one bank, the Ghana Commercial Bank.

The Savannah Regional Minister made this comment at the commissioning of an ultramodern toilet United Bank of Africa Ghana facility at a Attributo, a suburb of Damongo in the West Gonja municipality of the Savannah region last week.

The one hundred and thirty thousand dollars ($130,000) project which was financed by the bank and facilitated by the Member of Parliament (MP) for the Damongo Constituency Lawyer Samuel Abu Jinapor also has a borehole drilled attached to it for water supply to the facility.

Mr Saeed Muhazu Jibril was full of praise for the UNA Bank and commended the bank for it’s numerous developmental initiatives that is changing lives in many parts of the Africa.

He said as the then Municipal Chief Executive (MCE) for West Gonja Municipality and now the minister for Savannah region, when the collaboration between the UBA bank, West Gonja Municipality and Damongo MP started, he was very instrumental to getting a decent sanitary facility for the people of Attrubuto with the location of the facility strategically chosen because Attributo electoral area is noted for open defecation.

Mr Saeed Muhazu Jibril appealed to the West Gonja Municipal Assembly, the Hon Assembly Member and the people of the area to maintain the toilet facility to help attract more projects in future.

The head of Retail Banking for United Bank for Africa (UBA) Mr Peter Dery in an address during the commissioning said the UBA bank operates in 20 African countries with lots records in financing so many projects in their areas of operations.

He said the idea of constructing the facility was through the member of Parliament for Damongo.

He added that the commissioning delayed because of the Covid-19 pandemic and added that when the Damongo Constituency MP Hon Abu Jinapor approached the bank last year to support the community construct the toilet facility, the bank considered it because open defecation causes harm to society and the health hazards of open defecation.

Mr Dery on behalf of the bank appealed to the West Gonja Municipal assembly and the Assembly Member for the Attributo electoral area to take very good care of the facility so that it will serve the purpose for which it was established.

He further disclosed that the bank has many more collaborations with the West Gonja Municipality to undertake in future.

The Assemblyman for the Attributo- Abingakura electoral area Hon. Alhassan Adam APS thanked the UBA bank for providing the community with the toilet facility and assured them that the facility will be taken good care of to help serve the people for a longer period as it will lead to improved sanitation and also end open defecation in the area. He also thanked the hon MP for Damongo constituency and the Savannah Regional minister for the role played in getting the toilet facility for the area.

He said due to lack of proper toilet facilities in municipality, the United Nations Children’s Emergency Fund, (UNICEF) open defecation project has seen the assembly performing very poorly in the past three (3) years.

He said once the project has been completed and handed over to the municipality, there will be improvement in the sanitation situation in the area.