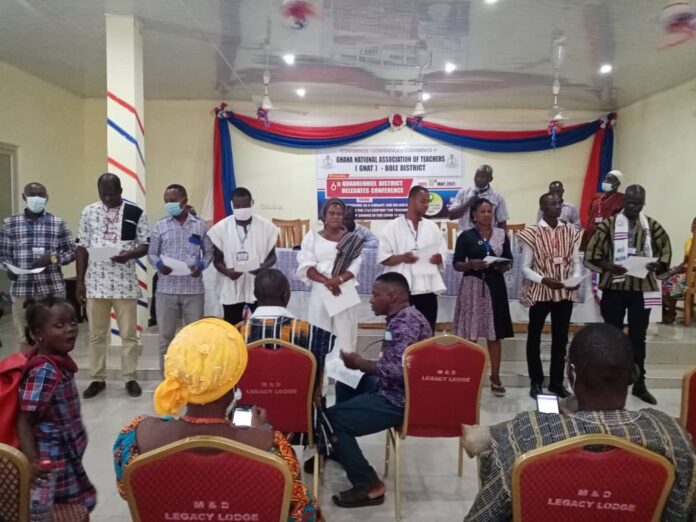 As part of the constitutional mandate of the Ghana National Association of Teachers (GNAT) to elect leaders to steer the affairs of the association for the next four years, the Bole District branch on 18th May, 2021 held its 53rd conference at the Mum and Dad legacy lodge in Bole, Savanah Region.

Delegates from across the Bole District converged to be part of the conference under the theme; “GNAT@ 90: Surviving as a Vibrant and Reliable Teacher Union in the 21st Century, the Teacher as an Agent of Change in the COVID- 19 Era”.

The Guest speaker at the Conference Rev. Father Martin Aousangyiri urged Teachers to be agents of moral change in pupils, since they are the second parents to these kids and must kick against any immoral act in society like lesbian, gay, bisexual, and transgender (LGBT).

The national representative of GNAT to the conference Mr Felix Owusu Ansah on his part urged teachers to further their education most especially those with Diploma certificates. He said this is so because Diploma certificats will be faced out soon

Mr Owusu Ansah added that problems of teachers especially those who have not been upgraded to their various ranks and those with issues of unpaid salary arrears or any form of allowances will soon be resolved and added that forms have been sent to the various directors of education to be completed and onwards submission to be worked on.

Before the election the Bole District GNAT Secretary, Moapewura Abdulai Jaaga said the conference was mainly to elect leaders to man the affairs of GNAT in the Bole district for the next four years and urged delegates to vote for people they think can handle the mantle.