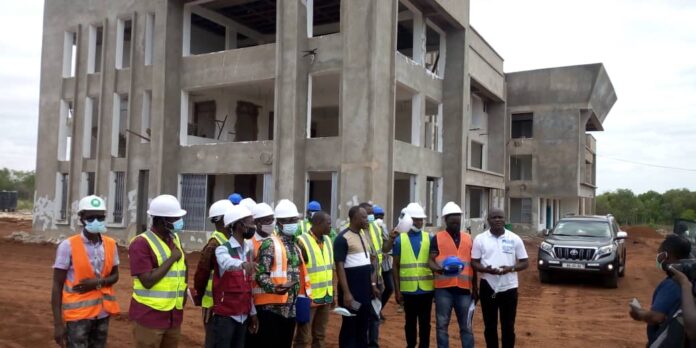 The Member of Parliament (MP) for Banda who doubles as the minority deputy whip on Local government and a member of the committee, Hon Ibrahim Ahmed has urged the traditional authorities to find ways of releasing lands free of litigation to government for the execution of government projects.

Speaking in Damongo on 12th May, 2021,during a tour by the Parliamentary select committee on local Government in the Savannah Region where there are construction of ongoing projects by the government, the Banda MP said land litigation is one of the major problems that affects the smooth construction of government projects and must be checked to enhance development.

He also charged local contractors in the country to see government projects as their own projects since they are also Ghanaians.

He said the construction of five (5) Regional coordinating council buildings in the country was awarded to contractors including a Chinese contractor who has already finished his project even before the time given whilst the local contractors are still on site trying their best also finish.

He said the Chinese contractor will find means and ways of making sure workers are on site even on Christmas days.

He however commended the contractor executing the project M/S Dagbene Borns Limited for the good job they are executing.

The parliamentary select committee on local government paid a one day working visit to the Savannah Regional capital where ongoing government projects are at various stages of completion.

The team led by Hon. Suleman Adamu Sanid MP for the Ahafo Ano North Constituency and Vice Chairman for the committee after visiting some of the project sites including the construction of a regional education offices and bungalows, a Court complex for the region and the Savannah Regional Coordinating council.

The coordinating council which is about 78% complete according to the superviser is a 3 unit storey building with a conference hall attached and so many offices including that of the regional minister and his deputy.

Hon Sanid expressed his satisfaction about the work done so far and urged the contractor to complete the project in time since the time given for the completion and handing over of the project has been extended to due to reasons explained to the team by the supervisor.

Other members of the committee include Hon Albert Akuka Alazogu MP for Garu Hon Dominic Napare MP for Sene East.