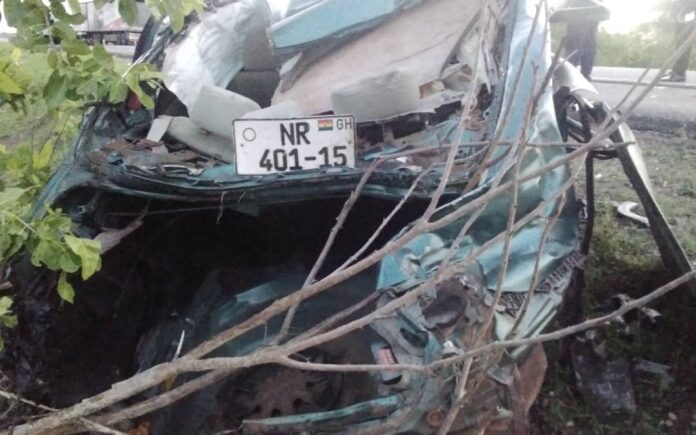 A saloon car carrying three persons was on the night of 12th May, 2021 involved in an accident at Sawaba in the Central Gonja district of the Savannah Region on the Kintampo- Tamale highway.

The injured include a Pregnant Woman and a 9 year old child who are currently in a critical condition at the Tamale Teaching Hospital in the Northern Region.

The victims, a male driver and two females including a child were first rushed to the Holistic Medicare Hospital in Buipe and later transfered to the Tamale Teaching Hospital for tertiary medical attention.

The saloon car with registration number NR 401-15, according to information reaching Bole based bNkilgi FM says the saloon car was from Kintampo in the Bono Region and heading towards Tamale in the Northern Region and upon reaching Sawaba number 2, burst the front tyre from the driver’s side and veered off its lane and ran under an articulator trailer with registration number GN 675-10.

Two occupants of the Articulator trailer, the driver and his mate who were traveling from Nakpanduri in the North East Region to Kumasi in the Ashanti Region escaped unhurt.