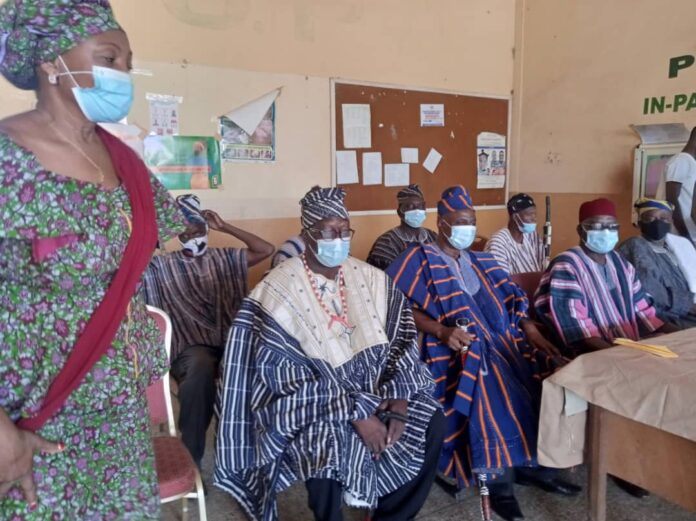 The Members of the Council of State comprising Kpongriwura Alhaji Adams Zakaria of Savannah Region (elected), Professor Daniel Anlieu-Mwini Bagah (elected) of Upper West Region, Zungulana Naa Col.(rtd) Mahamudu Tahiru (elected) of the Northern Region and the leader of delegation Naa Tumu – Koro Babini Kanton (nominated) donated one hundred (100) tubers of yam and a bull to the management of Bole District Hospital for onward distribution to the inmates of the hospital for the upcoming Eid festival.

Speaking to Bole based Nkilgi fm Kpongriwura Alhaji Adam Zakaria said they were in Bole to commend Bolewura Sarfo Kutuge Feso (I) for leading the fight on illegal logging in the Savannah Region and expressed his pleasure that Chiefs are now in the fore front to stop environmental degradation. He said rains no longer fall well due to the cutting down of trees. He said if logging and destruction of the environment do not stop water will continue to be scarce.

The Kpongriwura added that the giant and bold steps that the Paramount Chief of the Bole traditional area and the Chiefs and Queen Mothers of the Bole traditional area have taken in the fight against illigal minning, and the degradation of the forest cover of the land need to be commended. He encouraged the Bolewura to do more to protect the citizenry and generation yet unborn.

The Council of state member of Savannah Region Kpongriwura Zakaria added it is refreshing and rewarding to show compassion to sick in the holy month of Ramadan. He pledges the council’s support for the fight against the environmental cover of Ghana.

The Bole District Health Director said the donation is the first of it’s kind and therefore thanked the members of the Council of state for the gesture.

Mr Bakuri said the Bole District hospital mortuary has outlived it’s usefulness and has not been in use the past six months and therefore appealed to the members of the Council of state to help Bole get a mortuary.