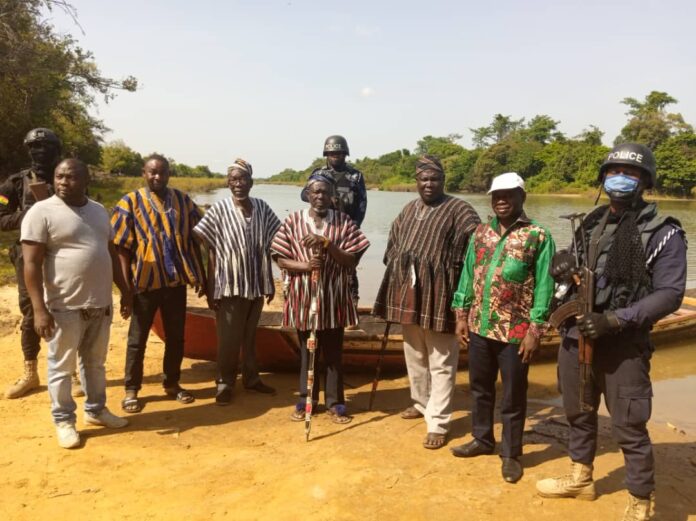 The Paramount chief of Bole Traditional Area and Chairman of Eminent Chiefs committee of the Savannah Regional House Chiefs to ban illegal logging, commercial charcoal burning and illegal mining on 1st May, 2021 visited four (4) communities along the Black Volta river to see for himself the extent of water pollution in the river as a result of the use of heavy metals.

The visit of the Paramount Chief himself is also aimed to investigate the extent of the heavy metal pollution in the Black Volta River due to illegal mining activities resulting in the water reportedly exceeding the safe drinking water guidelines that makes water unsafe for drinking and domestic purposes.

The Bolewura was accompanied by Mandari Wura Seidu Awusi, Chanchire Wura Ibrahim Alex, his Linguist Bakari Docte and the Secretary Abdulai Haruna Obey and the communities the Bolewura and his team visited include Mandari Nsunuah, TInyekura, Charche and Ntereso of the Bole Traditional Area.

Bolewura Kutuge Feso (I) and his team held mini meetings with the community people and urged them to remove all illegal mining machines on the river with immediate effect.

“You are settled here as fishermen and farmers and must be recognised as such and so dont involve yourself in galamsey”; Bolewura told the communities fishermen.

Bolewura Sarfo Kutuge Feso (I) also empowered the local people to support the Chiefs to remove all illegal minners from the Bank of the Black Volta and that anyone who defaults this order shall be arrested and prosecuted accordingly.

“I am empowering all chiefs along the black Volta to cease all illegal minners machines on the river and report to my palace. Anyone who is cought mining on the black Volta shall face the laws of the land.

“The threat posed by illegal mining to the quality of water resources in traditional area and for that matter Ghana has become a major public concern due to the closing down of some water treatment plants in the country”.