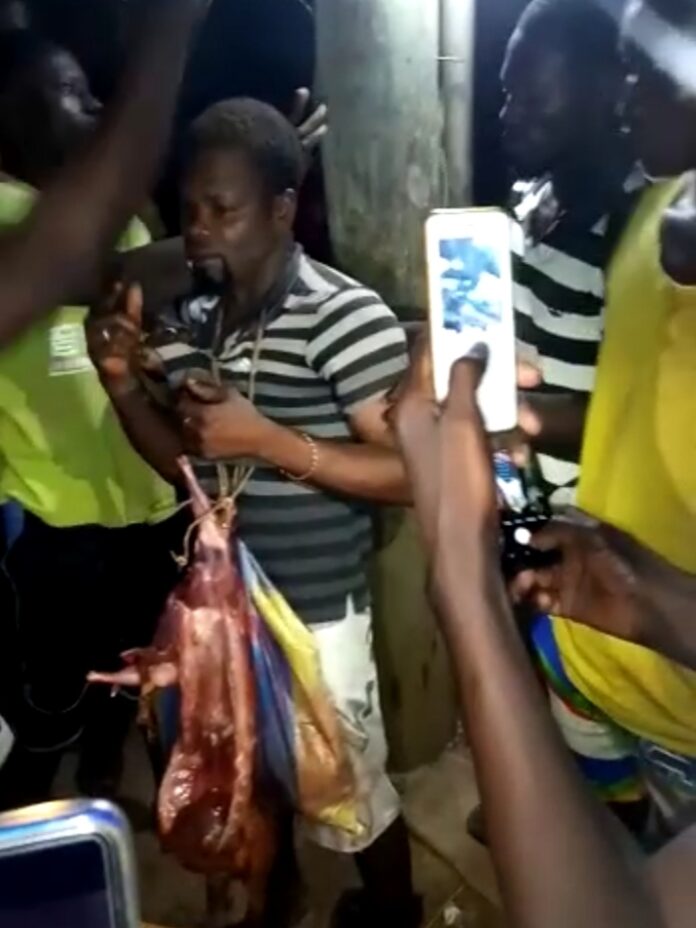 A suspected thief whose name was given as Ibrahim Kawala was apprehended in the late evening on Thursday by some youth in Zongo, a suburb of Damongo after he had slaughtered two goats in his room and attempting to sell them to a Khebab seller.

Narrating the incident by an eyewitness, Mr Ibrahim who has been suspected to be the brain behind all the missing goats in the area was seen by someone in the area dragging the animals into his room at about 11:00am in the morning.

Some youth of the area were quickly informed and they kept being alert and monitoring the movement of the young gentle guy who many looking at his demeanor will never suspect to be involved in the act of stealing.

The suspect convinced that attention was not on him slaughtered the animals, skinned them and hanged the carcasses in his room awaiting for night to fall for him to sell the meat to roadside khebab (chichinga) sellers.

Luck however eluded Ibrahim at about 8:00pm in the night when he after making arrangements to release the animals to his clients, the monitoring team apprehended him with one of the animals and after conducting a such in his room, another one was found.

According to information gathered, Ibrahim is the sole supplier of stolen goats to a popular khebab seller around the fertilizer depot area on the way to the Damongo hospital.

The said Khebab seller who the monitoring youth saw around the vicinity of Ibrahim was not also spared. His khebab setup including charcoal and everything was destroyed in the process but he managed to take to his heels after some slaps were unleashed on him.

The suspect Ibrahim also upon reaching the Damongo police station managed in a marathon fashion, drop the goats hanging on his neck and took to his heels and till now his whereabout is not known.

Ibrahim who had imported a girlfriend runned away leaving behind the girl who according to our source by his friends immediately left Damongo.

Meanwhile, videos of Ibrahim with the goats hanging on his neck have gone viral with many people wondering how and why such a handsome guy will be involved in stealing.