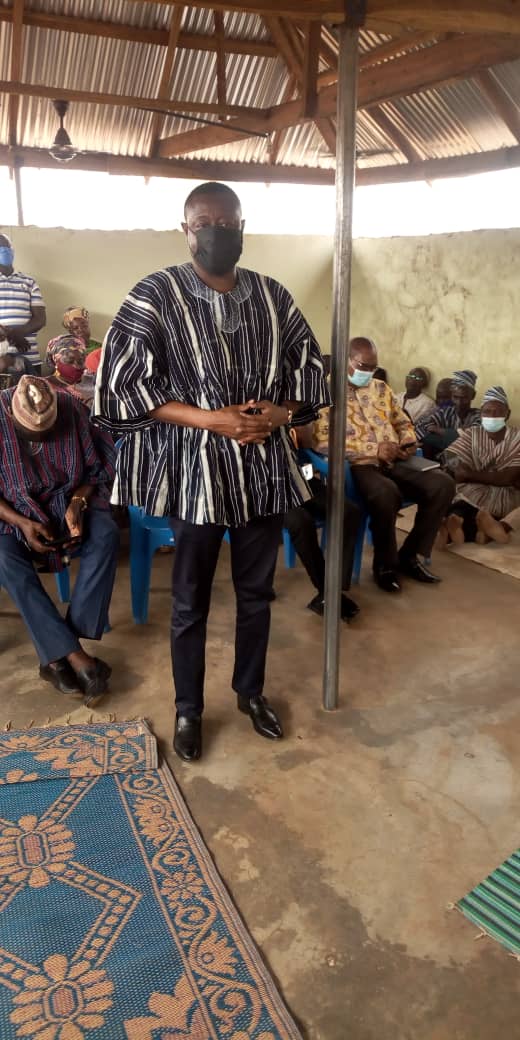 The Paramount chief of the Wasipe Traditional area, Wasipewura Anyame Kabasagya (II) has assured the Savannah Regional minister Mr Saeed Jibril Muhazu of his full support in bringing development to the new region.

The Savannah Regional minister who was at the palace of the Wasipewura on 30th March, 2021 to pay a courtesy call on the chiefs and people of Wasipe traditional area and also officially introduce himself to them as the minister incharge of the Savannah Region.

Mr Saeed Jibril Muhazu addressing the people of Wasipe raised the issues of working peacefully with chiefs and people of the Savannah Region as was directed by President Nana Akufo- Addo to enhance development in the region.

The Minister again asked for the support of the chiefs to help stop or reduce environmental degradation through lumbing, rosewood harvesting, and charcoal burning lamenting that; “if all the Shea trees are finished, where will our mothers fetch their livelihoods from”

He further touched on efforts being made to resolve all border disputes between the Wasipe traditional area and the neighbors including the dispute between Wasipe and Busunu,Wasipe and Tolon and so on.

The Wasipewura assured the Minister of the support of the chiefs of Wasipe in his fight against tree felling and charcoal burning but also pleaded that peasant farmers should be supported to grow more food.

He also appealed to the minister to speak to the President to complete the Busunu-Daboya-Mankarigu road which has been left unattended to by the contractors.

Mr Saeed Jibril said the road will soon become a very deplorable when the rains starts.

The Minister on his part assured him of the helping to bring development to the people of the Wasipe traditional area.

From Daboya the Savannah Regional Minister made a stop at Busunu where he met with the chiefs and people of the area.

He delivered the same message of familiarisation and the issue of tackling charcoal burning and logging in the Savannah Region.