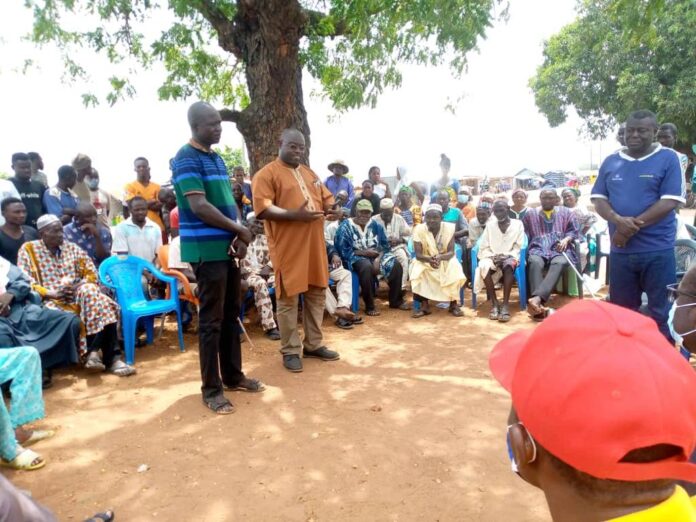 Farmers and owners of cattle including cattle herdsmen at Kawampe in the Bono East Region of Ghana has come into agreement through dialogue to help in preventing violence between them.

At a workshop organized at Kawampe by Jaksally Development Organization, a non-governmental organization that is into employment and wealth creation through community organization and rural business development especially environmental enterprise development based in the Savannah Region, the dialogue between the groups came out with a number of measures to prevent violence especially between farmers and cattle owners/ herdsmen in the area.

Among the measures taken include the prevention of cattle from destroying farms in the area and also farmers managing their farms without interfering cattle headmen.

It was also suggested that all cattle ranches must be located in one area or controlled in sections to prevent the animals from entering into people’s farms for destruction.

They farmers further suggested that water needs to be provided for the animals instead of roaming through peoples farms in search of drinking water for the animals.

Meanwhile, the issues of destruction, if solutions are not found maybe taken to the law court through Kintampo North divisional Police with
offenders being punished to pay extra cost.

The parties agreed that if the cattle cannot be controlled, they should rather be expelled from the area to end the frequent violence between them in the area.

The women farmers in the area again said that women in the area used to farm very closer to the community but that has been a thing of the past since cattle have ended up stopping them from going into farming.

The suggested again that there must be unity among community members to help reject and refuse cattle herdsmen from settling on their lands since apart from the destruction of their farmlands, armed robbery cases and several incidents of rape have been recorded in the area with most of the Fulani settlers figured as those behind the act.

Mr Seidu Jeremiah, Director for the
Jaksally Development Organisation mentioned seasonal water shortage issues and the demand for water as one of the greatest cause of the conflict and violence between the farmers and the Fulani herdsmen which needs to be tackled since all the people in the area including the Gonjas, Dagaabas, Konkombas, all have cattle.

He also said the Fulani labourers who are strangers and brought into the community are mostly involved in the criminal acts and not all the Fulanis, suggesting further that the bad ones and those who allow cattle to destroy farms and farmers crops must be sacked outright from the community.

These according to him can be enforced by stopping cars and getting they bad ones on board to ensure they finally leave the area.

Again, Mr Jeremiah said payment after destruction should be agreed between the affected farmer and cattle owner but if that still never works out, the parties involved can go to the community level to community leadership for redress.

He again suggested the use of officers from the Ministry of food and Agriculture to measure the quantity of farmland destroyed before payment is done by the cattle owners.

He went further to advise feeding cattle in the night should be stopped immediately since most of the destructions in the farms are done in the night at the blindside of the farmers.

He said the dialogue between the groups is a very good and timely since it will reduce the problem between Fulani and farmers during the dry season especially from December to may every year.