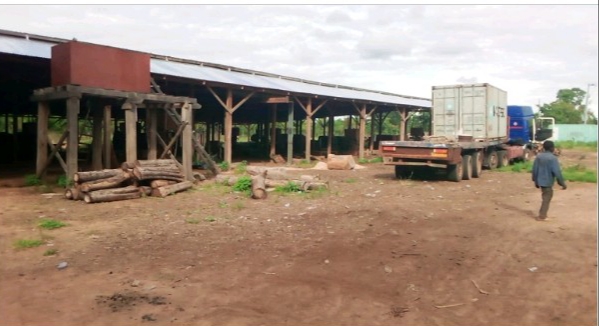 A Chinese rosewood company located at Yipala near Damongo capital of the Savannah Region has finally been closed down by the Chiefs, Assembyman and people of the electoral area.

The company which used to be called BrivyWelss but now known as Zagos New Style Company Limited are dealers in rosewood and Paapa trees.

The company buys rosewood and the Paapa tree logs from local chainsaw operators, processed them and export the wood to China.

Speaking to Bole based Nkilgi fm, the assembly man for the Yipala-Nabori electoral area Hon. Iddrisu Abdul-Rahman Balori disclosed that the Chiefs and people of his electoral area ordered for the closure of the firm because the company has been operating illegally over the years.

He made available copy of a letter to the media that has been handed over to the company to halt it’s operations in the area.

Portions of the letter dated 13th March, 2021 reads; “I wish to stand on a memorandum reached after a community stakeholder meeting to convey that you stop operations in the community forthwith. This has become necessary due to information received by stakeholders of the community from sources within the municipality that you are operating without a permit from the assembly. An act which is against the laws of Ghana and the municipal assembly”.

The letter further indicated that there was no formal engagement with the community before the company started operating, a situation which did not afford the community the opportunity to review the operations of the company and its Corporate Social Responsibility thereof.

The Savannah Regional minister Mr Saeed Muhazu Jibril in a speech during his assumption into office on last Monday promised to tackle the rosewood and charcoal burning menace which he said was the main subject matter during his vetting session in Accra.

He promised to meet the Regional Security committee (REGSEC) and other agencies within one month starting from 15th March 2021 to 15th April 2021 with those involved in the activities of charcoal burning and rosewood cutting to convey out of the forest reserves what they have already cut down after which the security services will arrest anybody who will continue with the logging activities in the Region.

It will be recalled that the former Savannah Regional Minister Hon Salifu Adam Braimah on 10th May, 2019, ordered a shutdown of BrivyWelss firm following the arrest of a Chinese woman Helen Huang in Tamale when she was transporting several containers of rosewood to Tema from Damongo.

The minister then formed a nine-member committee to resolve the twin evils of rosewood logging and commercial charcoal burning which had threatened the sustainability of the environment, farming, food security and communal harmony in the region.

Meanwhile, Mr Seidu Jeremiah of Jaksally Development Organization, an NGO that is championing the crusade against the harvesting of rosewood and charcoal burning has welcomed the news of the closedown of the factory.