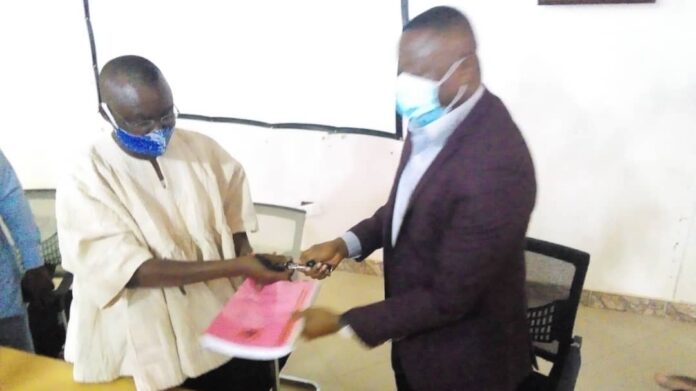 Former Member of Parliament (MP) for the Salaga South Constituency and first Regional Minister for the Savannah Region Hon Adam Salifu Braimah has officially handed over to Hon. Saeed Muhazu Jibril as the substantive minister for the region in 15th March, 2021.

Hon. Salifu Braimah Adam speaking at a short ceremony held at the Savannah Regional Coordinating Council and attended by District chief Executives across the Savannah Region thanked everybody that supported him during his tenure of office.

He mentioned the support he had especially from the King and Overlord of the Gonja Traditional area Yagbonwura Tuntumba Boresa (I). The outgone Regional commended the Yagbonwura for his support and fatherly advice throughout his period as the Regional Minister.

Hon. Salifu Braimah however tasked the incoming minister to tackle some major issues which he was already working on especially the rosewood and charcoal burning menace that is affecting the region’s forest reserve.

He said a lot has been done though not complete but he believes Hon. Saeed Jibril will help in curbing the menance since he as a former Municipal Chief Executive (MCE) for West Gonja was part of the fight over the years.

On Chieftaincy conflicts in the region, Hon Braimah Adam Salifu commended the committee formed to resolve all issues of chieftaincy headed by Buipewura Abdulai Jinapor (II) for finding lasting solutions to some of the cases in the region citing Bole as an example and other places such as Sonyo which was solved even before he came into office and urged Hon. Mahazu to make sure he gives his full support to the committee for other areas to also enjoy lasting peace in the region.

The incoming Savannah Regional minister Mr Saeed Muhazu Jibril also in a speech promised to continue from his predecessor to make sure the region enjoys nothing but the best interms of peace and development.

He used the opportunity to thank his predecessor and promised to tackle especially the rosewood and charcoal burning menace which he said was the main subject matter during his vetting session in Accra.

He said he will meet the REGSEC and other agencies within a one month starting from 15th March 2021 to 15th April 2021 and give those involved in the activities of charcoal burning and rosewood cutting to convey out of the forest reserves what they have already cut down after which the security services will arrest those involved.

He added that a lot will be done to end aacharcoal burning àand rosewood cutting in the region in the coming days.

The incoming Regional Minister also mentioned the security situation in the region especially the issue of armed robbery on the highways in the which according to him will also be a thing of the past.

Citations were presented to the outgoing regional minister and his deputy for their immense contributions towards the growth and development of the infant region.

Present at the ceremony were the DCE’s across the seven districts in the region, the Savannah Regional Police Commander, Hon. Yeyu Tikah Samuel former deputy regional minister, departmental heads of the Regional Coordinating Counci and others.