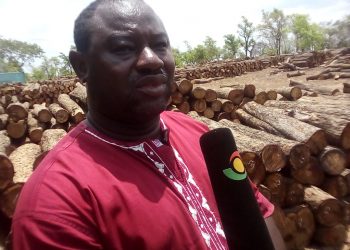 A sub- Chief from the Wasipe (Daboya) Traditional area of Gonja, Gbunapewura Mahama Sakan has said that a non-Governmental organisation (NGO) operating in the Savannah Region called Jaksally Development Organisation will find it difficult to lead the crusade against logging because they started and continued on a wrong footing by disregarding authority, protocol and courtesy to the land owners and political administrators of the Savannah Region.

The former Member of Parliament (MP) for the then Damongo- Daboya Constituency Gbunapewura Mahama made these comments in response to a proposal Jaksally Development Organisation that bye-laws including heavy fines in the area where the illegal harvesting is taken place should be enacted and that; “Any chief caught (being involved in rosewood harvesting) is destooled and his entire family struck out of the chieftaincy line”.

During further discussion on Jaksally’s proposal on a popular Gonja based WhatsApp group, Gbunapewura said he kept advising that the Programme Coordinator of Jaksally Development Organization and a famous anti- rosewood harvesting campaigner, Mr. Seidu Jeremiah should not approach rosewood harvesting and other environmental issues in the Savannah Region in a confrontational manner because the land owners are not happy they have been named and shamed in many instances.

Gbunapewura expressed surprise that receipts issued by the King and Overlord of Gonja (Yagbonwura) to rosewood loggers have been published and that he will not mince words to say that it is very embarrassing to the Gonja kingdom.

According to Gbunapewura the Jaksally organisation cannot lead the crusade against rosewood harvesting and that there is “no credible organisation yet with capacity and the goodwill to mobilize the understanding of people and bring them to act in concert”.

The Chief from Wasipe (Daboya) said; “I don’t stand in defense of wrong doing but when it comes to matters concerning Jakpa Palace, let us add reverance..I’m not comfortable with such publications.

He further said no by-laws can be enacted regarding resources on the land without the explicit agreement of the Overlord and so Jaksally so approach the issue in it’s right way and they will see results.

“We are simply ignoring that the land has owners and for that matter their consensus and agreement and blessings matter.
Go to the Overlord and start from there.
Well that has its own momentum. You see, we have to go through sensitisation and conscientisation,
seek consensus among all stakeholders that we are going to stop the rosewood harvesting and other land degradation activities. Roles are shared and we set milestones etc”; Gbunapewura said

The input of Gbunapewura was supported by the Zantaniwura of the Busunu Traditional area of Gonja Chief Gabriel Gblo Dari who said; “Please in our effort to combat the degradation of our environment let us be guided by the traditional protocols and deal cautiously with all stakeholders especially the custodians of the land. Let us continue to educate and support one another in this fight against environmental degradation”.

He added; “Please let the NGO (Jaksally) or any well meaning individuals assist identity areas where this illegal business takes place. Let the names of these communities be published, then let the District Assembly of those communities be officially notified. Let the authorities of the District Assembly in collaboration with the chiefs, land priests and well meaning youth groups put in place strategies to abate this cruel practice. Let the people who do the cutting be arrested. Hopefully they will lead to the financiers. Let the Chiefs and the land/fetish priests invoke the spirits of our ancestors who passed on fertile lands and these trees to us to deal with those who are involved in such practice. If chiefs are involved we will not need to be identifying or naming them. The invoking of the ancestors alone will put great fear in them. Let regular public sensitization also continue to take.

Zantaniwura said some NGO’s and individuals who are already engaged in this fight and part that may God and the ancestors of the land continue to protect them.

The Registrar of the Gonja Traditional Council also made an input and said; “For matters of rosewood, we are not well organized and the grounds are not prepared to combat it. Until we prepare ourselves well then we step out. Let’s not scratch the back of a crocodile and leave the stomach. You have to scratch the stomach with strategy”.

But the Executive Director of the Center for Conflict Transformation And Peace Studies in Damongo, Reverend Father Clement M. Aapengnuo entreated the people of the Savannah Region to “make a distinction between the Chieftaincy institution and the individuals in the institution”.

Reverend Father Clement said there are times people need to speak truth to power disclosing that his work brings him to interior villages every day and so he sees a lot that if something is not done about the people of the Savannah Region are heading for serious violent confrontations.