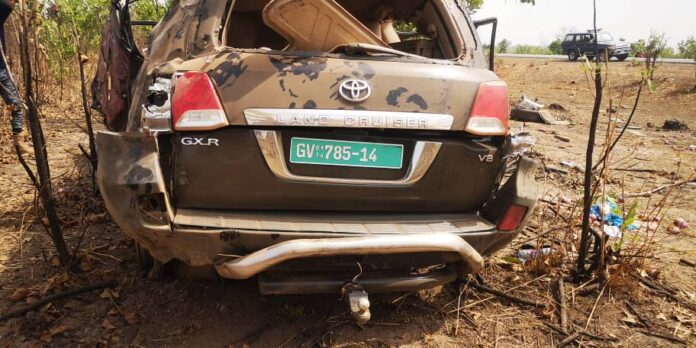 Another fatal accident took place between Fufulso-Junction and Domeabra in the Central Gonja District of the Savannah Region this night (Tuesday 23rd February, 2021).

The accident involving a Landcruser belonging to the Kwame Nkrumah University of Science and Technology (KNUST), Kumasi with registration number GV 785-14 resulted in the death of driver but the two otter occupants one Alex Champion, a Lecturer at KNUST and Anita Andrews are in very critical condition and have been rushed to the Tamale Teaching Hospital (TTH) by ambulance.

Many people have expressed concern on the numerous accidents on the Buipe to Fufulso stretch of the Techiman to Tamale road.

In recent times, a Garu-Kumasi bound commercial bus with registration number GR 7287-21 got involved in a fatal accident in between Buipe and Fufulso on 18th February, 2021 with two persons dead and several others sustaining various degrees of injuries with some passengers losing their legs and arms.

This has prompted the Paramount Chief of the Mankpan Traditional area of Gonjaland, Mankpanwura Jakpa Achor-ade Borenyi (I) to disclosed his resolve to get a solution to the the accidents and so has made arrangements with his Land Priest to offer Traditional intercessory prayers.

Speaking on these accidents in his jurisdiction on the Buipe to Tamale road, the Mankpanwura said; “It has been in my mind for some time now to get a solution to this occurance of rampant accidents on that particular stretch of the road. I have already made some arrangements with my Land Priest (Kasawulewura) to get a day for prayers traditionally on that happens to an end”.

The Mankpanwura also disclosed that he would involve other stakeholders in finding a solution to the accidents on the Buipe to Tamale stretch of the highway even though the cause of the accidents are either mechanical (such as tyre bursts) or through the fault of drivers.