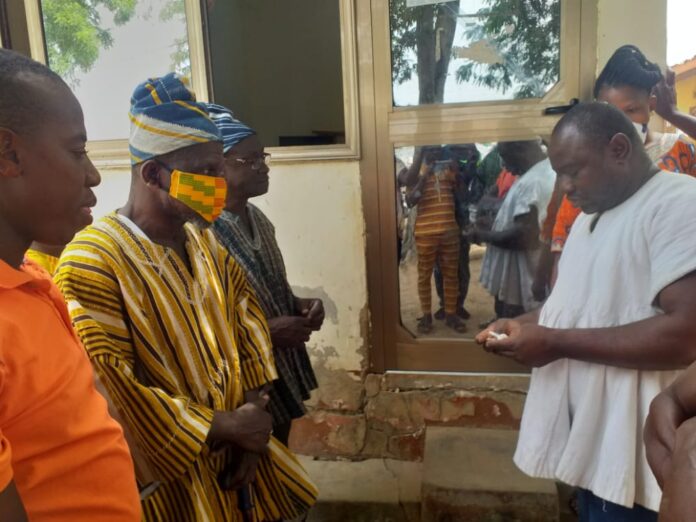 The former Coordinator of the Bole Lands and Customary Secretariat, Mr Seidu Jeremiah on Friday 19th February 2021 handed over the Secretariat office to the new Management Board constituted by the Paramount Chief of the Bole Traditional area Bolewura Sarfo Kutuge Feso (I).

Speaking exclusively to Bole based Nkilgi FM after a short handing over ceremony, Mr Seidu Jeremiah mentioned that, the Bole lands and customary secretariat office space was locked down simply because there was instability and a curfew in Bole making the office space a bit difficult to operate since they deal directly with traditional leadership.

He added that the controversy over who was a legitimate Bolewura after the demise of Bolewura Awuladese Pontonpron (ll) was also a big factor in locking up the office space.

He finally mentioned that there is stability in Bole and a new Paramount Chief, Bolewura safo Kutege Feso (l) who has set up a new board with a coordinator to continue from where the old board stopped.

He mentioned that the handing over day was a good and a great day being a Friday to hand over the office space to be used by the new board.

Chief Kiyigbon-asewura said that a man can never fulfil everything in life, and that the new board will continue from where Mr Jeremiah and his team stopped.

He added that, in due time the traditional council will reward Mr Seidu Jeremiah with a chieftaincy title.

The Board Chairman on behalf of Bolewura Sarfo Kutege Feso (l) and the entire board wished Mr Jeremiah all the best in life and stated that they will always call on him to assist the new board when the need arises.

The inauguration was done by the Administrator of the Stool Lands for the Northern Region, Savannah and North East Regions Mr Daniel Acheampong at the premises of the Bole Traditional Council Customary land Secretariat.