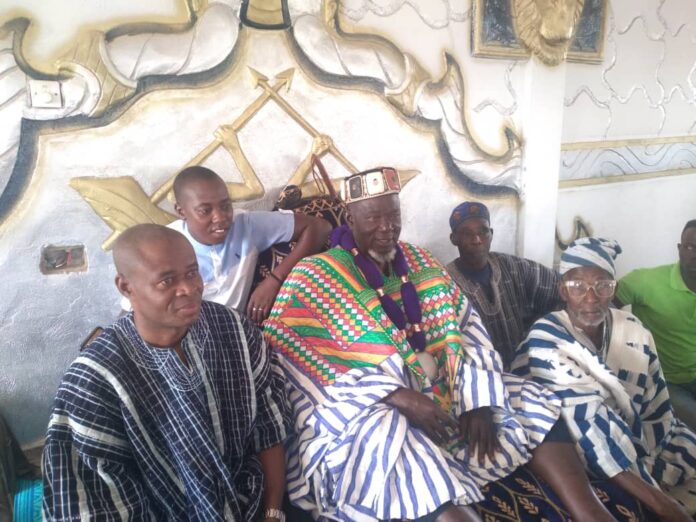 The Member of Parliament (MP) for Bole-Bamboi Constituency Hon Alhaji Yussif Sulemana has appealed to the Paramount Chief of the Bole Traditional area Bolewura Sarfo Kutuge Feso (I) to propose to any government that Coles to power to sanction the building of a training college in the Bole District of the Savannah Region.

The Bole MP said this when he paid a courtesy call on the Paramount on Bolewura Sarfo Kutuge Feso (I) at his palace on new year day on Friday, 1st January, 2021.

The MP he said he will then use his effort as an MP to persuade the ministry of education to make sure the training college that is proposed by the Bolewura comes to being.

The Bole MP further told the Bolewura about his plans to fence the Bole Royal Mausoleum. “Wherr Paramount chiefs in the Bole Traditional Area is too opened and need to be fenced” the MP said.

The Bole MP also spoke about how peaceful all the ethnic groups in Bole-Bamboi Constituency has been living together and has urged all to maintain the unity for the development of the Constituency.

Bolewura Sarfo Kutuge Feso (I) during his speech thanked the MP for coming to his palace to pay homage to him and his Chiefs.

The Bolewura said the idea of getting a training college for Bole which was mentioned by the MP is a good thing which he and his Chiefs will do as the MP rightly said.

The Bolewura said he and his elders have always been at the back of the MP with prayers since the beginning till won the seat.

Bolewura Kutuge feso (I), requested for chairs from the MP and told the MP to get that for them when ready any day. But the MP told the Bolewura he will give them 30 chairs immediately before he subsequently bring the rest to the palace.

Meanwhile the Bole MP Hon Yusif Sulemana and NDC leadership in the Bole Bamboi constituency met also Head pastors of the Bole Local council of Churches and their spouses in Bole at a mini dinner on new year’s day. This follows the MP’s visit to the churches a night before for the cross over events.

The Pastors and their spouses were full of appreciation and commendation to the MP and his team for the wonderful working relationship with them over the years. The Pastors suggested a number of issues and appealed to the MP to table those issues at Parliament to feed into national policy.

The MP urged all to work towards peace building and pledged to work with the Christian community in his Constituency better going forward.