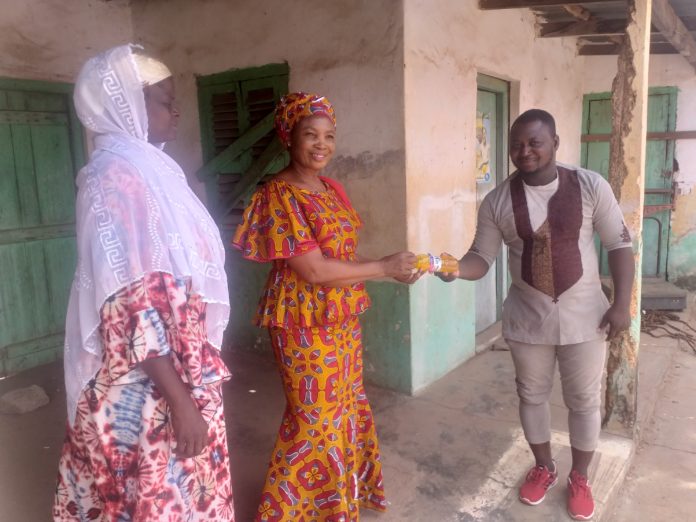 The District Chief Executive (DCE) for Bole Madam Veronica Alele Heming has commended the members of the Ghana National Association of Garment Makers (GNAGM), Bole branch for donating a large quantity of liquid soaps to assist the leadership of the District and the good people of Bole in the fight against the Coronavirus.

The DCE said she was very shocked when she  came and saw what the Association of Garment Makers in Bole have produced liquid soaps in boxes to assist in hand washing. She assured them of great assistance in their duties as and when they need help.

The DCE mentioned that the Assembly will sit with the Garment  Makers and discuss on how to make plenty nose marks to help the good people of Bole.

She encouraged them to get themselves ready for more training at the Rural Technology Facility (RTF) in Bole which will be opened officially on Monday, 27th of April 2020.

The DCE pleaded with institutions and associations including, Motor King Riders Association, Food Vendors Association and so on to come to the aid of Assembly in the fight contain the COVID-19 pandemic.

Madam Veronica Alele Heming also called on Bole based Nkilgi FM to give the Bole District Health Directorate more airtime for information dissemination on the Coronavirus. The DCE said Nkilgi FM has already given two hours airtime for free but called on the Radio  station to give more of their time “because we are not in the normal times”.

The DCE disclosed that the Bole District  Assembly has formed some committees in consultation with the Member of Parliament (MP) for Bole-Bamboi  Constituency Alhaji Yusif Sulemana and other stakeholders to help disseminate information to the people do adhere to the directives of President  Nana Akufo-Addo.
“I know some people do politics with the fight of this COVID-19, but I don’t do politics with it because I care for my people”, she said.

Speaking to Bole based Nkilgi FM after presenting the items to the DCE and MP, the Chairperson of the Ghana National Association of Garment Makers (GNAGM), Bole Branch, Madam Masata Saaka said they have been thinking of what to do to help leadership combat the Coronavirus hence their decision to produce liquid soaps for proper hand washing. The Vice-Chairman of the Association, Mr Abu Mohammed aka Blue Boy added that they are very much ready to even assist the assembly in producing locally made face masks.

The Ghana National Association of Garment Makers in Bole also donated to the MP for Bole-Bamboi Hon Yusif Sulemana to assist him in his fight to protect his people against the pandemic.
The Secretary of the National Democratic Congress (NDC) for the Bole-Bamboi Constituency, Mr Abudulai Asumah and the Organiser of the party Alhaji Alhasaan received the liquid soaps on behalf of the MP and thanked members of the Association for their gesture.

The NDC Executives said the items will be put into good use and that the MP Hon Yussif Sulemana at the appropriate time will pay the Association a visit to personally say thank them.