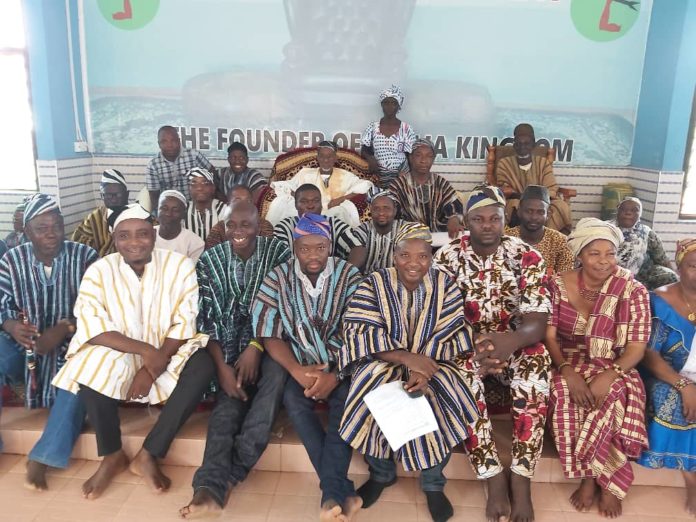 The King and Overlord of Gonja, Yagbonwura Tutumba Boresa (I) has urged the the leadership of of the Youth of both Gonja and Dagbon to continue their good works of promoting peace to support the two traditional authorities overcome the challenges of land disputes.

Speaking during a courtesy call on him by the leadership of Gonjaland Youth Association, Dagbon Forum and Dagbon Malima Zungo (DAMAZ) at the Jakpa palace on 19th April, 2020, Yagbonwura in a speech read on his behalf urged the leadership of the youth front of the two Kingdoms to preach peace and also make it a responsibility to educate and aid their people to seek legal redress than resorting to arms which ruins economic activities and scare investors from the land.

He further urged the youth of the two Kingdoms to fix the Wasipe and Tolon boundary matter permanently for peace to prevail and further appealed to the two traditional authorities on the need for continues support of the youth wings of Gonja and Dagbon to assist the traditional authority to achieve success in this circumstances.

Yagbonwura again said in the 21st century, it is not the matter of weapons but rather harmonised dialogue in search of peace for development in diversity.

The Yagbonwura said he is optimistic that the boundary matter between the Wasipewura and the Tolon-Naa in the shortest possible time will be a thing of the past since Allah has put the two Kingdoms, Gonjas and Dagombas side by side for a good reason.

The King of Gonja continued that Dagombas and Gonjas are like a man and wife and can never be separated.

”Those who do not know after the wars of the past, Gonjas and Dagombas signed a peace agreement to live in peace and harmony and never to raise arms against each other. We agreed when signing the pact of peace that whosoever attempts to destroy the peace should be exposed” Yagbonwura added.

He concluded by saying that that Dagombas have lived in the East, North, Central and West of Gonja for over 300 years without any threat from any single Gonja chief or citizen.

The Paramount Chief of the Buipe Traditional Area, Buipewura Jinapor (II) urged the youth to continuously preach peace and also make it  a responsibility to educate and aide the indigenes to seek legal redress than resorting to arms which ruins economic activities and scare investors.

Buipewura who is the Vice- President of the Gonja Traditional Council on behalf of the Yagbonwura presented a ram, tubers of yam and beautifully woven Daboya smocks to the leadership of Dagbon Forum and Dagbon Malima Zungo (DAMAZ).

Meanwhile, Chief Gbunapewura Alhaji Mahama Sakan of the Wasipe Traditional Area of Gonja said exclusively to Bole based Nkilgi FM that any settler coming to settle on the land of Wasipe must first of all notify the Wasipewura and his subjects before settling.

He said if that step is taken, it will curtail future misunderstanding since their presence will surely be known by the Wasipewura.

Earlier the leadership of both Associations visited the King of Dagbon Ya Naa at Yendi on 18th April, 2020.

Ya Naa Abukari (II) reportedly said; “I want to make it emphatically clear that, anytime some form of skirmishes emerge, I want to plead that we don’t describe it as war between Gonjas and Dagombas, but as a quarrel between members of the same household because the level at which the two kingdoms have coexisted, I am sure that even on the day of reckoning, God Himself will ask that we dwell in the same place in heaven. So tell my brother the Yagbonwura when you get there tomorrow that I said there’s no day we will ever go to war”.