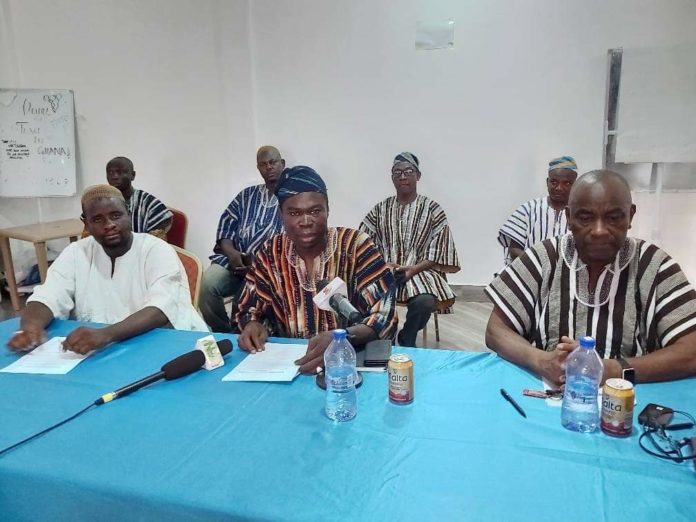 The leadership of the Gonjaland Youth Association (GLYA), Dagbang Forum and Dagbon Malima Zungo (DAMAZ) have held an emergency meeting last Saturday, 11th April, 2020 at Tamale to find immediate and lasting solutions on threats to peace between the Wasipe Traditional area of Gonja and the Tolon Traditional area of Dagbon. This comes as a complement to the combined efforts by the Regional Security Councils of the Savannah and Northern Regions, and the Gonja and Dagbang Traditional Councils in this regard.

The meeting was followed by a visit to the Tolon Naa, Alhaji Major (Rtd) Sulemana Abubakar and the Wasipewura, Yakubu Mumuni Anyame Kabasagiya at their palaces at Tolon and Daboya on Sunday 12th April, 2020 where useful and fruitful discussions were held in the presence of the Chiefs and Elders of both Palaces where the two Chiefs’ recounted the long-standing cordial relationships and intertwining family ties between Gonjas and Dagombas, most particularly between the people of Wasipe and Tolon and the occupants of the skins.

Subsequently a joint Press Conference was held at Tamale on 13th April, 2020 and the release of a statement signed by Mohammed Amin, Dr Sulemana Abdulai who are Presidents of the Gonjaland Youth Association and Dagbang Forum as well as Alhaji Jagbo Baako who is Chairman of the Dagbon Malima Zungo (DAMAZ).

The statement said the groups have noticed with grave concern that there was some misunderstanding between the people of Wasipe of Gonja and Tolon of Dagbon, leading to the movement of some settlers and farmers from the Wasipe community back to the Tolon community and that this was based on information spread about alleged imminent attacks which potentially threatened the security of the communities and the cordial relationship between Gonjas and Dagombas.

The Gonja and Dagomba groups said they are fully aware and conscious of the fact that the days when people used weapons such as guns, cutlasses and bows and arrows to resolve conflicts and settle their differences are long gone.

The statement from the groups further explained that; “in these days of civilization, people resort to dialogue and constant engagements on the basis of mutual respect, consensus building and rule of law as the only viable for conflict resolution and peaceful co-existence in diversity”.

“We, the youth of Gonjaland and Dagbang hereby resolve to continue working together for the lasting peace and sustainable development of our communities” the Youth groups said.

The joint statement from the Youth groups said; “In the light of the above, and on the basis of our confidence in the strong assurances of His Royal Highness the Tolon Naa and His Royal Highness the Wasipewura, we wish to entreat the settlers and farmers to go back to their various settlements and farmlands where they used to be, and continue with their lives and farming activities without hindrance; call on all members of the communities to desist from war and rumour mongering, and spreading of information that have the tendency of creating and inflaming tension in the communities; encourage the members of the communities to report individuals who engage in unlawful acts to the security services for the appropriate action;  call on the security services to deal with individuals who engage in deviant acts in accordance with the law; call on the community members to desist from acts that only serve their individual parochial and selfish interests, and rather work towards our collective interests and the sustainable development of the communities; and entreat our Chiefs and community members to follow due process and use the appropriate legal means for resolving conflicts and disagreements”.