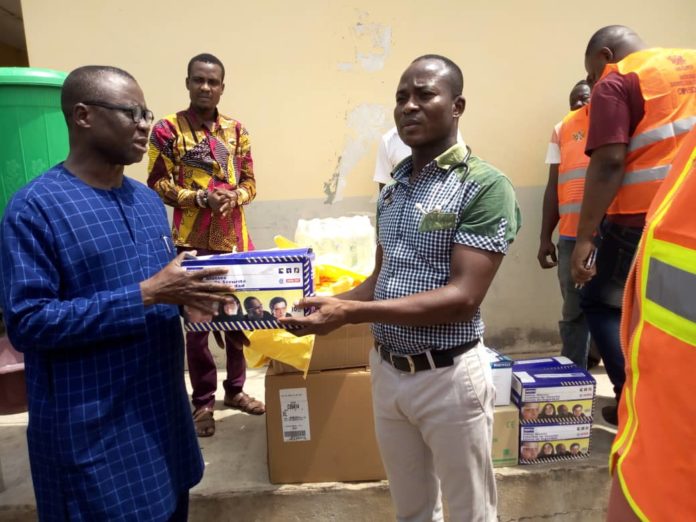 Presenting the items to the hospital, the Savannah Regional Minister Hon. Salifu Adam Braimah who stood in for Dr Clifford Braimah said Coronavirus has taken the world by storm with many health centers and facilities lacking the needed basic logistics to combat the disease.

Hon. Salifu Adam said an illustrious son of the land in the person of Dr Clifford Braimah therefore thought it wise as duty to contribute his quota by donating the items to the hospital which  in a long support them in their fight against the deadly Corvid-19 pandemic.

Dr Saadare Anlaagmen Vitalis, medical superintendent of the Damongo Catholic Hospital thanked the minister and his team for the visit and the donation from Dr Clifford and other people who have heard the cry of the hospital in terms of logistics and are coming to their aid.

He said in the hospital’s small way, they have been able to procure some of the basic items even though not enough for them.

He said apart from the Veronica buckets and hand sanitisers the hospital procured,a team has been specially trained to handle cases of Corvid-19.

He told the minister and his entourage that the hospital is no more an holding centre but a designated treatment center for mild  cases which his team has been trained for.
He again said a special center with some  PPEs  with the hospital used for some to test some  suspected cases even though all of them proved negative with a center ready to receive and quarantine suspected cases.

The Minister said at the Out Patinet Department of the hospital that there is a point patients are screened compulsorily even before getting to the records.

Dr Vitalis said because of the pandemic of Corvid-19, all elective surgerys and special clinics except general OPDs and emergency surgerys that the hospital are attending to.
He further reiterated that the Damongo Catholic Hospital will soon become a regional treatment center since Bole and all other centers will soon refer cases to the hospital.

He used the opportunity to again appeal to the philanthropist and persons willing to support them especially the issue of fuel for transporting samples to Kumasi etc.
Hon. Salifu Adam Braimah assured him of the full support of the coordinating council during this trying times.

The minister and his team were later taken round the holding center by Dr Saadare to see how prepared they are for cases that will be brought to the hospital.

In the entourage of the Savannah Regional Minister included NPP Constituency and regional executives who also thanked the hospital authorities for the good work they are doing for the infant region and further urged the staff and workers to do more to save the situation.