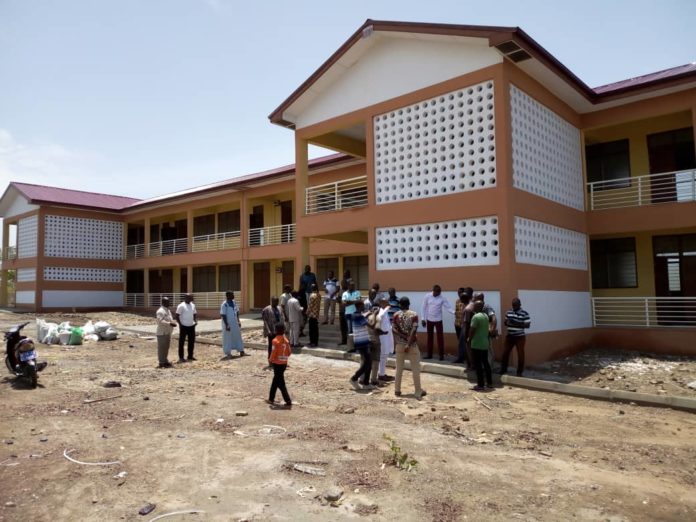 The Municipal Chief Executive (MCE) for the West Gonja Municipal Assembly, Hon. Saeed Muhazu Jibreel has disclosed exclusively to Bole Nkilgi FM that the double-track system currently ongoing in the country following the Free Senior High policy introduced by the government will be a thing of the past next academic year.

Mr Muhazu Jibreel was speaking during the handing over ceremony of a 12-unit single storey building project at Larabanga in the West Gonja Municipality on 25th March, 2020.

The project which is earmarked to be an Islamic Senior High School for the Larabanga Community will admit its first batch of students in September 2020.

The MCE commended the government of President Nana Akufo-Addo and specifically mentioned Vice- President Dr Alhaji Mahamudu Bawumia for fulfilling his promise of building an Islamic Senior High School for the Larabanga community.
According to the MCE, the then running mate to the then opposition leader promised the people of Laribanga prior to the 2016 general elections that, should the New Patriotic Party (NPP) win the elections in 2016, Laribanga will get its first Islamic Senior High School.

The MCE said through the efforts of Dr Bawumia, the Ghana Education Trust Fund (GETFUND) under its emergency project awarded the contract which has since been completed and handed over to the Municipal Assembly.

Mr Muhazu however bemoaned that the classrooms alone without other ancillary projects like administration block, toilet facilities for both staff and students will make the project incomplete.

He added however that in the coming weeks, a contractor will be on site to  start the construction of an administration block and other facilities in order for the infrastructure to be used for it’s intended purposes  instead of converting some of the classrooms into offices for the smooth running of the school in the next academic year which begins in September, 2020.

The consultant to the GETFUND emergency  project and the contractor Alhaji Brone Ltd took the delegation led by the Hon MCE for West Gonja Municipal Assembly round to inspect the project  before the building was officially handed over to the Municipal Chief Executive.

On water situation in the school, the Mr Muhazu said, a borehole had been sunk which will later be mechanized to provide portable water for the students and staff of the school.

The keys to the  school were handed over to the West Gonja Municipal Director of Education,  Mr Adam Salifu awaiting commissioning which the Vice President is expected to be fully present later this year.
Earlier in Damongo, the MCE was handed over a 6-unit classroom block at  Ndewura Jakpa Senior High School.

He later handed over the facility to the the Assistant Headmistress of the school Madam Mary Teini Azorketima who recieved it on behalf of the headmaster of the school.

Madam Mary on behalf of the headmaster thanked the MCE and the government of Ghana for the project but raised the issue of some defects on the project which the consultant ordered the contractor to fix in a matter of 2 weeks to make it conducive for the students and staff of the school to use.