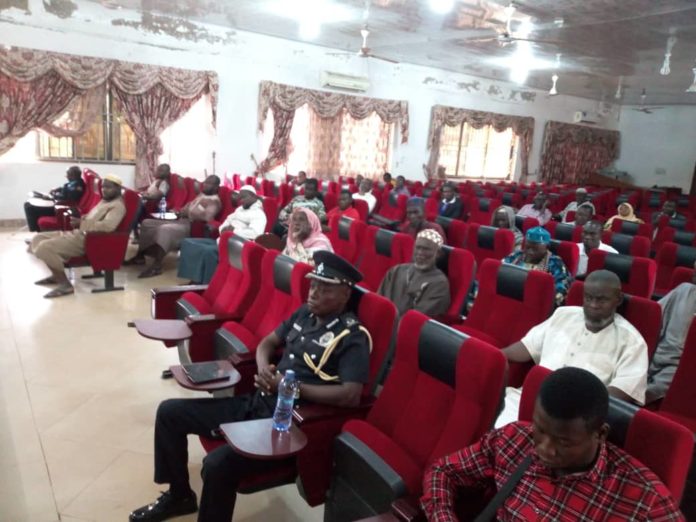 The Minister of the Savannah  Region Hon Adam Braimah Salifu has met with the leadership of the various religious bodies in Damongo at the Savannah Regional Coordinating Council on Tuesday 24th March, 2020.

The emergency meeting saw in attendance Imams, Reverend Fathers of the Catholic Church and Pastors of the various churches in the Savannah Regional capital of Damongo.

Addressing the religious leaders at the Savannah Regional Coordinating Council, the Savannah Regional Minister said he conveyed the meeting as a result of a signal he received from the national security in Accra that they have enough information about the various religious bodies especially the Muslim Ummah in the entire Savannah Region especially Damongo the regional capital not complying with the directives of the President of Ghana Nana Addo Akufo Addo with regards to the temporal suspension of their mode of prayers and other social activities.

He said it is not just the prayers but also funerals, naming and wedding ceremonies still takes place with people involved forgetting the temporal ban put in place by the President of Ghana on gatherings of any sought.

Hon. Salifu Braimah said he therefore found it necessary to meet them and to inform them that the eye of the National Security is on the region and has advised the religious leaders to comply since that will be in their own interest and safety from contracting the disease.

He said the use of force by the security agencies to ensure compliance will not speak well for the infant region and therefore pleaded with the men of God not to give that opportunity to the men in uniform.

The Municipal chief Executive for the West Gonja Municipality Mr Saeed Jebreel Muhazu also in a speech said the disease is fast spreading and has to be checked.

He further reminded especially the aged that they are more vulnerable to the disease since their system is not strong enough to fight the deadly virus and they are those who mostly occupies especially the mosques to make sure they pray in their rooms for the sake of prevention.

He took them through the number of cases recorded in Ghana and how fast the disease is spreading in the country and again reminded them that even in the Holy land of Mecca people are staying away from the mosques and observing prayers in their homes.

Head Pastor for the Evangelical Church of Ghana Damongo branch, Pastor Samuel Awuni said his Church and for that matter almost all churches have been directed from their headquarterses to hault church services as a result of the Corvid 19 menace.

He said the churches are there because of the people who must be free from all forms of diseases before they can come for worship.

He therefore appealed to all to consider the safety, health and welfare of their people first before taking any decision to violate the directives of the President which is in a way will save lives of their membership.
Chief Imam of the Damongo Central Mosque, Alhaji Amadu Moshie assured the Savannah Regional Coordinating Council and  Minister that he will issue a statement and personally meet all other Imams to make sure the Muslim Ummah complys with the directives since it is a must for not just Muslims but everybody in the region.
He said it is because God loves the world that is why the disease is not hidden from mankind.

He said we are also very lucky experts have knowledge about how to prevent the disease and that he will make sure he carrys the message across and will also ensure all complys to the directives.

Sheik Eliasu Mohammed Kamil, head of the Center Islamic Teaching and Affairs Damongo, an Islamic Institute based in Damongo added his voice to the Chief Imam of Damongo and also appealed to the Muslim Ummah to strictly comply since even in Saudi Arabia, it is only Imams and known persons who are allowed to enter into mosques to observe prayers.

He said strangers are not allowed to pray in this mosques because of the Coronavirus outbreak and therefore appealed to Muslims all over Ghana to pray for Ghana.

Meanwhile, the Savannah Regional Coordinating Council is putting in place  a sensitisation, awareness and education program on the various radio stations for the Christian and Muslim leaders to educate their membership about the dangers and prevention of the deadly Coronavirus.