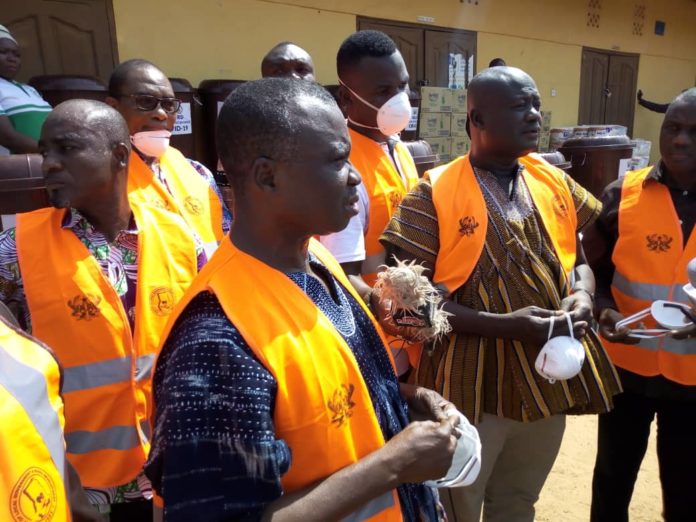 The Minister of the Savannah  Region Hon. Adam Braimah Salifu has directed all Municipal and District Chief Executives (MMDCE’s) in the Savannah Region to release their vehicles to help in educating the masses especially in the rural areas on the deadly Coronavirus (COVID-19).

The Minister said this at the Savannah Regional Coordinating Council in Damongo during the regional launch of education and sensitization of market representatives and other important stake holders in the community by the Ministry  of Local  Government and Rural Development (MLGRD) as well as the handing over of some items to the Central Gonja district, Bole District, East Gonja Municipality and the West Gonja Municipality to be able to fight the deadly Coronavirus disease.
Every district in the Region is expected to take delivering of the items with each district picking 10 ‘Veronica buckets’ with their stands,10 boxes each of liquid soap,10 boxes of hand sanitizers and 10 packets of big sized tissue papers to be placed at vantage places such markets, mosques, churches, lorry stations etc in the various districts.

Hon Adam Braimah Salifu used the opportunity to appeal to the media to be circumspect in their reportage about the deadly disease since many people  depend solely on the media especially the radio and televisions for vital information and reminded the media again that the region needs their assistance to combat the disease since there is no known cure for now to end the disease.

On the issue of some people still violating the directives of the President such as gathering in the mosque and churches for prayers, funeral and naming ceremonies gatherings and so on, the Savannah Regional Minister appealed to them to adhere to the call of the President to ensure safety by temporary halting those activities and again urged the media to intensify education on those practices since he will not be happy to see the use of force to make sure people comply to this simple instructions.

The Savannah Regional Officer for Ghana Information Services Mr Ziblim Mumuni in an address appealed to the media to always involve experts in educating the masses through inviting them for talk shows on the airwaves and should not be ahead of experts in situations like this.

Mr Ziblim again appealed to the media to always discuss Coronavirus exclusively without involving any other topic especially politics.

He said during a sensitisation workshop in Accra organised for information officers across Ghana, the media was very much appreciated in their efforts in educating the masses.

The exercise according to the Municipal Chief Executive for the West Gonja Municipal Assembly, Hon. Saeed Muhazu Jibril will take place at exactly 4:00pm and has therefore appealed to shop owners, market women to comply for the success of the one day exercise.

Mr Jibril again warned religious leaders especially the Muslim community not to go against the Presidents directives since he will be compelled to use the Police and Military to compulsory ensure they comply if the continue to ignore what the entire country is adhering to.