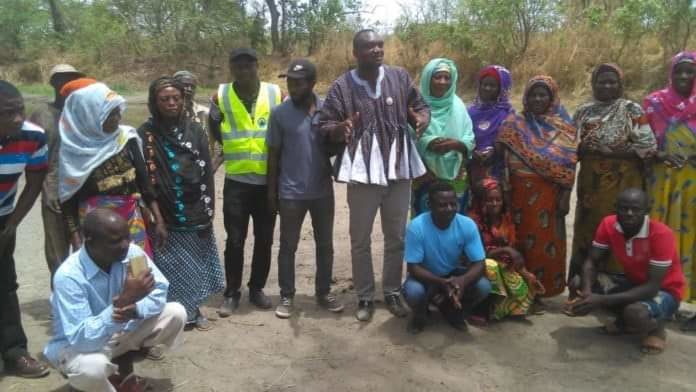 The District Chief Executive (DCE) for the Sawla-Tuna-Kalba District of the Savannah Region Mr Lawal Tamimu together with other prominent members of the Assembly and the Nakwabi Community have cut sod for the Construction of a Dam that will cost over Four Hundred thousand Ghana Cedis (GHc400,000.00).

Speaking at a short ceremony the DCE said the project is in line with the Akuffo Addo led administration’s Commitment to improving the Agriculture sector as part of government’s 1 Village 1 Dam initiative.

Mr Lawal Tamimu said about 150 men and women will gain income in when the construction of the dam is completed. He said it forms part of government’s strategic measures to eradicate Hunger and Poverty as contained in the Millennium development goals.

The Sawla-Tuna-Kalba DCE said the program which is labour intensive will will empower Farmers to cultivate more farm produce.

He said the project which forms part of the Ghana Productive safety Net Project (GPSNP) will serve the people of the Nakwabi Community and it’s environs.

Members of the Nakwabi community were sensitised on the project as a team from Accra joined the regional team to complement the exercise.

Also present at the short ceremony wefe the District Finance officer, the District co ordinating director, the District Works Engineers and a host of other important personalities who accompanied the DCE to Nakwabi.

The DCE Mr Tamimu called on the people of Nakwabi to vote massively for the Akuffo Addo led Administration to continue the good works springing all over the country.

He also called on the people to vote massively for the NPP Parliamentary Candidate for the Sawla-Kalba Constituency Mr Banasco Nuhu Seidu.