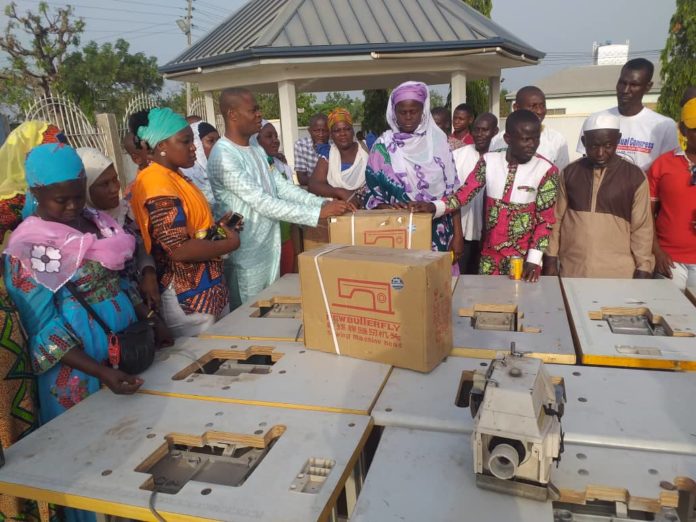 The Member of Parliament (MP) for the Bole- Bamboi Constituency Hon Alhaji Yussif Sulemana has donated thirty (30) sowing machines to the various Tailors Association in Bole township on Friday 6th of March 2020.

Speaking at a brief ceremony at his residence in Bole to hand over the sewing machines, the MP told the Tailors Association leadership to continue to remain United and pray for the National Democratic Congress (NDC), John Dramani Mahama and he Alhaji Yussif Sulemana.

He assured them that going forward, he will always have a get- together (party) with them every December to keep their relationship alive and to always share ideas at such programs.

He again asked all to remain calm in this election year and that it is God who chooses a leader hence the will of God will reflect in the December polls but added that he is very sure the people of the Bole-Bamboi Constituency will vote massively for the NDC.

The MP mentioned that all projects that have been left behind in the Bole District in the fields of Education, Health, Roads and other areas will be addressed by the next NDC government.

He disclosed that the 30 sewing machines were purchased with the help of the MP’s Common Fund.

The colourful ceremony saw many leaders and apprentices of the various zones for the Tailors Association on Bole on attendance.

The leadership of the Tailors Association put before the MP the challenges hindering the development of their Associations in the District for onward submission to former President John Dramani Mahama when he visits the Savannah region for his SpeakOutTour across the Nation.

Some of the issues raised include lack of start up capital for Tailors to help set up their own shops after completing their training and uniforms meant for educational institutions should always be brought down to the District level for Tailors to show.

The leadership of the Tailors Association in Bole thanked the MP for his continuous support to the Associations and prayed for Allah’s guidance for his life and ambitions.