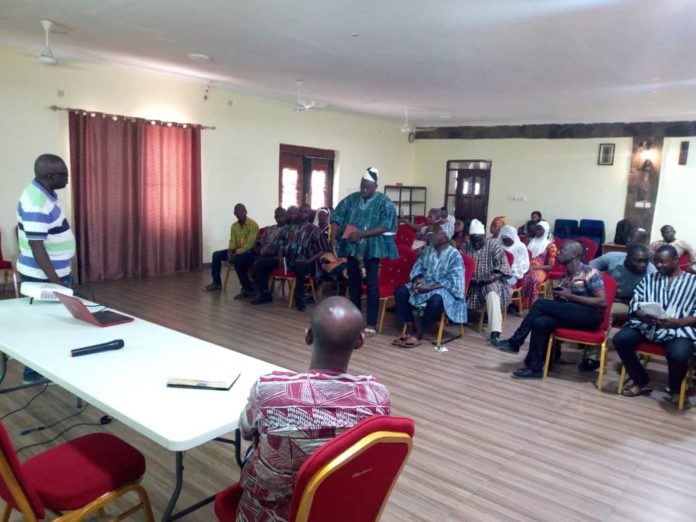 A sub-Chief from the Buipe Traditional Area of Gonja Kunchiwura Ziblila has advised other Traditional areas in the Gonja area to adopt the Buipewura Jinapor’s approach of bringing into his palace any Fulani herdsman who destroys farmlands with his animals and instantly lashing him and charging them appropriately using agricultural officers to value the cost of the crops destroyed on the farms.

The sub- Chief from the Buipe Traditional Area made this comment at one day stakeholders workshop organised by the Coalition For Development Of Northern Ghana (NorthCode- Ghana) on 7th March, 2020 aimed at advocating for women in Northern Ghana to have uninterrupted resources to boost crop production with selected Chiefs and Queenmothers from the Bole, West Gonja Municipal, Sawla- Tuna-Kalba and Central Gonja Districts of the Savannah Region as well as Chiefs from the West Mamprusi district in the North- East region participated.

The workshop dubbed ”Increasing women access to productive land and agricultural inputs for increased food production and incomes” saw the participation of five districts in the Savannah Region including the West Mamprusi District in the North East Region. Funding for the workshop is from The Business Sector Advocacy Challenge Fund (BUSAC Fund).

Speaking on the issue of Fulanis in most parts of Northern Ghana moving all the time with dangerous weapons even in market as raised by some women participants at the workshop, Chief Kunchiwura said it is a practice that the Paramount Chief of the Buipe traditional area  will never condone some actions of Fulanis in his traditional area. He said Fulanis especially on market days in Buipe never moves with daggers and weapons since they risk loosing them permanently to the Palace of the chief if found and therefore pleaded with other traditional areas to emulate this since even Gonjas who are the land owners do not move with dangerous weapons.

Kunchiwura Ziblila said the workshop by (NorthCode- Ghana) has educated him to encourage women to go into farming since that will better their lives in the very near future if they work very hard.

The Coordinator of North Code- Ghana, Mr Cletus Zume speaking at the workshop said traditionally land is vested in men rather than women but research over the years shows that women does a lot of farm activities from planting to harvesting and so on but do not have access to land but rather becomes labourers on the field.

He said NorthCode has been running the BUSAC Program for the past one and half years and has reached the point where stakeholders have to come together to support women since times has changed where women must have access to land to boost agricultural production in the region to better their lives and their families.

Several critical issues were raised as to why women have difficulties in going into crop production by the participants.

Most of the participants raised the issue of farmlands being far from homes that has to be looked into since women find it difficult moving very far from home to engage in farming activities and therefore pleaded with the traditional authorities to released lands that are closer to their homes to enable them go into farming.

The participants also raised the issues of nomadic herdsmen especially the Fulanis as the major problem that hinders agriculture productivity in the region since most farmlands are destroyed by animals which most often becomes free cases because most of the animals belongs to the chiefs and traditional authorities who settles the issues without compensating the affected farmer.

A Queen mother from the Buipe traditional area, BridgeWurche Barchisu encouraged women to go into farming and called for greater and bigger support for women to go into agriculture productivity.

Several other participants including the Ministry of food and Agriculture, West Gonja Municipal Assembly, women groups, the police, Non- Governmental  organisations (NGO’s) such as Arocha Ghana took part in the workshop.

NorthCode-Ghana  has over the years championed much involvement of women in  agriculture in Ghana especially in the northern sector.

It would be recalled that in 2017 North Code- Ghana in Collaboration with the U. S government’s Global Hunger &Food Security Initiative project ‘Feed the Future ‘ under it’s ADVANCE project facilitated in the signing of a memorandum of Understanding (MOU) between chiefs and women farmers in the Mion District of the Northern region to help promote women farming in the country especially, the Northern region.