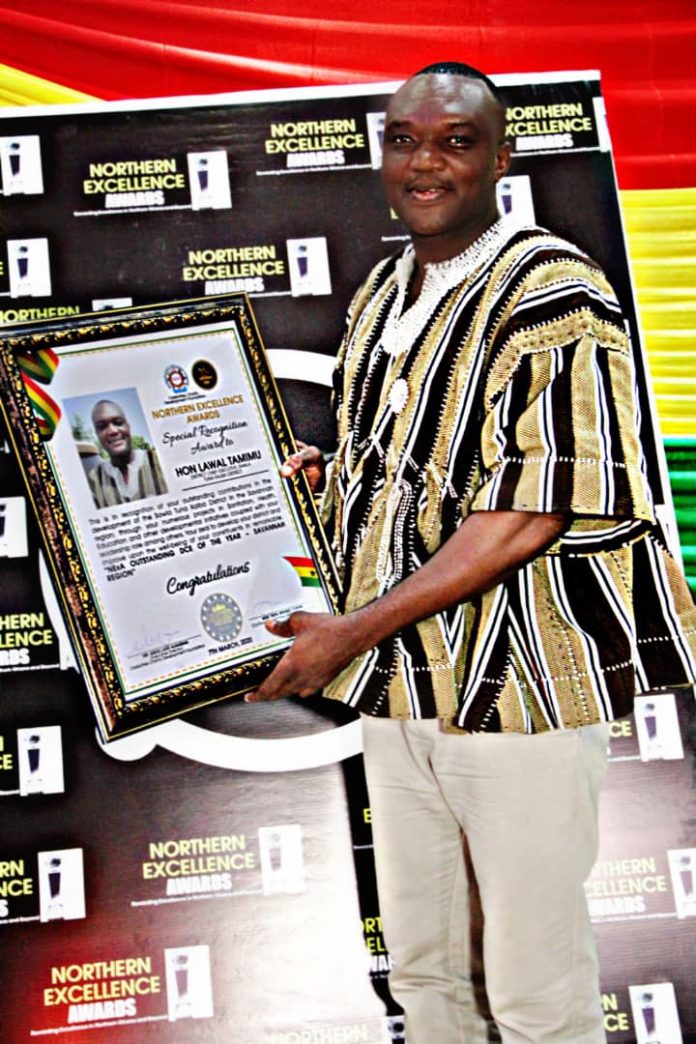 The District Chief Executive (DCE) for the Sawla-Tuna-Kalba District of the Savannah  Region Mr Lawal Tamimu has received an Honorary Award as an “Outstanding DCE of the year – Savannah Region” at the prestigious 2nd  Northern Excellence Awards held on Saturday 7th March, 2020 in the Northern Regional Capital, Tamale.

Delivering an address at the event, the elated DCE expressed his sincere gratitude to organisers of the event for acknowledging his efforts in making the Sawla-Tuna-Kalba  District the best among the rest by honouring him.

According to him, the award will go a long way to motivate him to work harder for the rapid development of his District.

Mr Tamimu further dedicated the award to the President of Ghana, Nana Akuffo- Addo for giving him the opportunity to serve the people of the Sawla District.

The Sawla DCE also used the opportunity to remind Ghanaians the need to give the Akuffo Addo led  administration four more years to do more for the country.

He said, the unprecedented developmental projects springing across the entire  country is an indication that Ghana is indeed on the right track.

This year’s Northern Excellence Awards was held at the plush Global Dream Hotel in Tamale where hard working Personalities like the Vice- President of Ghana Dr Mahamud Bawumia, Minister for Local Government and Rural Development Hajia Alima Mahama, the Mayor of Tamale Hon Musah Superior and others were honoured for their contribution towards the development of the various sectors and  communities.

The Grammy award Nominee, Rocky Dawuni, Music Icon Abu Sadiq, Cowtribe were all Honored for contributing the development of their various sectors and communities respectively.