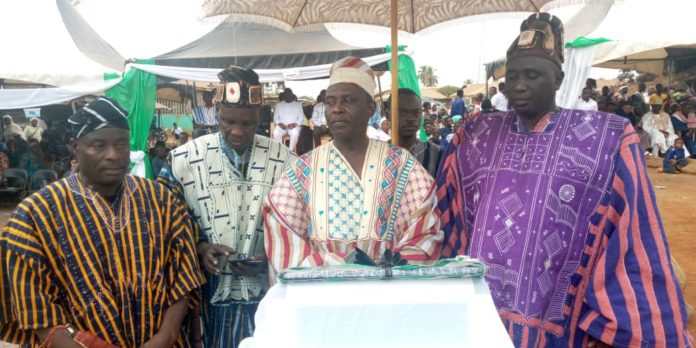 The Paramount Chief  of the Bole Traditional Area of Gonja Bolewura Sarfo Kutuge Feso (I) has urged youth of Wangara to take responsibility for their own destinies and say no to profitless and unrewarding ventures.

A speech delivered by Tunawura Alhaji Mumuni Issac Dramani on behalf of the Bolewura said the invitation of the Bolewura and his Chiefs to Wenchi in the Bono Region for the Wangara Youth Association inaugural meeting i  Wenchi is of good will and a means to strengthen the bond of good relationship between the two neighbouring towns of Bole and Wenchi.

A delegation of Chiefs and Queen mothers from the Bole Traditional Area led by Mandariwura Seidu Awusi participated in the  inaugural ceremony of the Wangara Youth Association of Wenchi on Saturday 7th March 2020, following an official invitation extended to His Royal Highness Bolewura Sarfo Kutuge Feso (I) by the chiefs and people of the wangara community in wenchi as the special quests of honour.

The invitation is of good will and means to strengthen bond of good relationship between the two neighbouring towns. Permit me to reiterate the importance of this memorable occasion; it is an occasion that rekindles the bond of relationship that has always existed between the people of Bole Traditional Area and our brothers and sisters of the Wangara Community in Wenchi.

The brotherhood dates back to the time of the Trans-Saharan Trade.

The Wangara ethnic group arguably the largest tribal family in the West Africa sub-region exists in Ghana, ivory coast, Burkina-faso, Mali, Guinea, Sierra Leone, Gambia, Senegal, Nigeria, Niger and part of Mauritania. The significance of this ceremony cannot therefore be over emphasized since  it marks a period of cultural and traditional renaissance between Bole and the Wangara community in Wenchi.Culturally, appellations like Bamba, Watara, Kuribari, Sidi, Kamagtey run through both Bole and Wenchi Islamic communities.

The people of Bole have become one with Wenchi through marital unions. The union has also grown into Boleyoungmen going to Wenchi for Islamic knowledge and  jurisprudence. It is my pleasure to commend the chiefs and people of Wangara community on this important occasion.

On behalf of the people of Bole Traditional Area, I wish to extend my profound gratitude to the Wangara youth for their foresight, unity of purpose and for coming together to promote peace a solid tool for  development.

The Wangara’s all over Ghana are noted for their industry, hardwork and dedication in the field of commerce and transportation. May the great Allah help you in these various field of endeavor.

I am very grateful  to add that there has been lasting peace between the people of Bole and the Wangara community in Wenchi and it’s my hope that this peace would be maintained and cherished at all times.

I wish to conclude by urging the youth to take responsibility for their own destinies and say no to profitless and unrewarding ventures.

On this note, I wish the chiefs and the people of the Wangara community in Wenchi a happy  inauguration and happy celebration.

May the Almighty Allah bless you individually and collectively as a people.